DESCRIPTION OF THE JUDAS ROBE by Larry Rodness

During the height of the Spanish Inquisition a ruthless inquisitor by the name of Bishop Roberto Promane tortures a fellow priest, Father Sanchez, for information about the whereabouts of a relic known as The Judas Robe. The robe is believed to be the single piece of physical proof of God on Earth. Promane succeeds in uncovering the robe only to lose it to Sanchez’s rescuers, the knights of The Order Of Christ.

Joel Gardiner, a pre-med student, is attacked one night by thugs after leaving a campus pub. A young woman named Sophia rescues him and reveals that Joel’s mother, Natalie, is descended from the Order Of Christ, the faction that has kept the robe hidden for centuries. These thugs are part of a conspiracy group led by a Bishop Newman who seek the robe in order to uncover a secret held for centuries.

A BIT ABOUT WHO IS IN THE STORY

JOEL is a by-the-book pre-med student who comes from a divorced family where his father and brothers leave him with his mother who they believe is crazy for believing in a myth of her heritage. Once he gets to college he meets LISA and they quickly begin a relationship. Joel gets an internship at BIOPHARM, a pharmaceutical company, due to a discovery he made that could change the health of the human race, under the condition he can conduct his own research into a cure a rare that affects only around 7000 people. (This is all already established and explained as the story flows.)

Joel’s discovery as well as the Robe of Judas, the myth Joel’s family doesn’t believe in, are the two targets of BISHOP NEWMAN and his conspiracy group.

Joel is aided by SOPHIA and FATHER SANCHEZ who are all too familiar with the bishop and the robe. The reveals at the end are shocking actors in this play, but a couple are hinted at during moments in the story. All are believable in the context of the story.

LARRY RODNESS creates a fun ride that is engrossing and will keep you turning the pages. As a writer my biggest compliment to give another author is I want these characters to appear in a series of books. It would be an easy thing to do. The characters are all well defined and have distinct voices.

I’ve seen some reference Dan Brown, because it  has to do with the hunt for a Jesus associated item. I don’t get that vibe. The book is not that detailed or plodding as are Dan Brown’s famous books. The story has the details it needs as far as the Judas Robe. This keeps the book as a fast paced read. This book is its own story and not a pretender. The search for the robe is not a mystery of solving this puzzle or whatever. The real goal of Joel and Lisa is to survive. And if they can discover the Judas Robe is real and if so keep it out of the hands of the antagonist groups (yes I said groups), find a cure for the medical condition and make Joel’s discovery work for the human race along the way, then all the better.

As with any book I read I’m looking for the relationships and personalities. This one has reality relationships, meaning not perfect. There are strains on Joel and Lisa, Joel and his mother, Sophia and other characters and even some messy moments of bad choices made, or so the characters think. I personally don’t think so. But that’s the great thing about the book. You have villains you like and you want things to work out somehow and heroes you just can’t stand, or at least I can’t. And I think that’s the way it should be.

You come to understand choices made by both sides or all sides, there are multiple sides, but easy to follow.

As much as I like the story there are some plot holes that I think contribute to my attitude toward some characters as well as what I consider a confusing moment between Joel and his mother during a pivotal turn in Joel’s view points about so many things. Perhaps if there is another book it can be explained, but I suppose for now the reader has to come up with their own solutions. This moment doesn’t take away from the story or enjoyment, but the plot holes do pull you out of the world Rodness has created for a brief moment.

The pace of the story is excellent and I think that’s part of why any hiccups aren’t huge problems with enjoyment.

My favorite character is Sophia. A quiet character that seems to just be there and you’re not surprised by it but you should be. I got to the point I was expecting her to be just on the edge watching  each scene play out.

I will say there are sexual scenes in the book as well as killing with a bit of gore. Really only the sexual scenes were a little surprise but I think in a way they explain a bit about why the people end up willing to do what they do later on. Just mentioning the scenes wouldn’t have worked.

Summing it up: Not much filler. But as with any book there is a lull between those big moments, but as I said, not much. Great characters. Surprises. Mystery. Some layers and subplots that could play out further in later books but didn’t need to here.

As I’ve said before… I’m not good at comparing authors work although that helps a reader get a feel for what they are getting into. Maybe you can think of a movie or book that is a mystery with a bit of action and rabid cult where you don’t have any fighting skills or clues and you’re told to find the treasure or your loved ones die.

A note on rating a book: People these days throw 5’s and 4’s around, when they really mean 3’s and 4’s. 3 means the book meets what you expect it to be. 4 is a really good book. A 5 rating should be a rare thing.

The above rating is just shy of a really good book rating because of just a few plot holes.

I would read other books by this author. I would say the book would be for maybe 18 and over due to the sexual moments. You may say 16 because of it being a book and not visual. And I get that. I am on the fence.

Click one of the logos below to visit the book site so you can purchase. You can also read the first 3 chapters on Amazon with the Kindle Look inside feature. 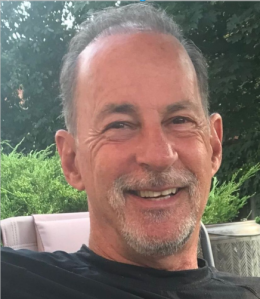 Larry began his professional career as a singer at the age of 19 working with various bands around Toronto. After studying musical theatre Larry worked in summer stock where his love of writing began. From that point on he wrote for dinner theatre, trade shows, and even ice skating shows. To date he has written over 10 screenplays and has had 3 optioned.

© 2021- Ronovan Hester Copyright reserved. The author asserts his moral and legal rights over this work.