Rebirth is the first of a three-part science fiction series entitled The Praegressus Project. Eighteen-year-old Chris and his mother were both taken in the dead-of-night. Soon, Chris awakens in a cell. Confused and frightened, he has no knowledge of where his mother is–only that she’s accused of treason and children must pay for their parents’ crimes. Chris must join forces with others just like him in the fight for survival against a group of doctors who are experimenting with science in order to enhance the human race.

The premise of the story kept my interest from start to finish. It held at a steady pace with a couple of action scenes here and there. Most of the setting takes place solely in the cells, so there wasn’t a lot of world building; however, that didn’t drag the plot. Unlike most science fiction stories, Rebirth wasn’t about building a world, but about character development. It’s hard not to like the characters, particularly Liz, the young woman Chris first meets after he awakens in his own cell. Chris, on the other hand, took awhile for me to like. But I believe out of the small group, Chris was the one who grew the most–and maybe that’s what author Aaron Hodges had in mind, although I can’t vouch for sure.

I believe Rebirth would fit just about any type of readers. There’s just about everything one could want: science, fantasy, friendship, love, power, and survival. It’s clean of bad language and no sex scenes. There is a bit of violence, though, but it’s not heavy, so no gore. It only shows how evil these experimenters are. They treat their captors as if they’re lab rats.

There were some errors here and there, but I’m quickly learning not to count against it…especially since the errors were few. After all, we are all human, and shouldn’t be expected to be perfect! Even the greatest has misprints at times. I don’t know if Aaron Hodges edited his own work or not, but as a professional editor myself, I’ve learned that it’s not easy editing one’s own work.

Rebirth was well-written, tight and a story I couldn’t wait to finish just to find out what happens. Aaron Hodges is definitely on the fast track to becoming an excellent science fiction novelist. I can’t wait to read more from him. Highly recommended. 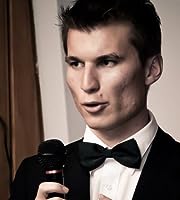 Aaron Hodges was born in 1989 in the small town of Whakatane, New Zealand. He studied for five years at the University of Auckland, completing a Bachelor’s of Science in Biology and Geography, and a Masters of Environmental Engineering. After working as an environmental consultant for two years, he grew tired of office work and decided to quit his job and see the world. Two years later, his travels have taken him through South East Asia, Canada, the USA, Mexico, Central America, and South America. Today, his adventures continue…

One thought on “Rebirth #bookreview”