STEVEN IS A BOY WHO PLAYS TO WIN – BUT THIS IS NO GAME.

THIS IS AN ADVENTURE HE CAN’T CONTROL.

“Steven Topcliff loves gaming but doesn’t believe in fairies or magic – until tricky cousin Tracy drags him away from his game console and gets him to press a red button on a mysterious stone they find in the local park. The stone turns out to be a one-way gateway to Fairyland, where nature rules supreme and technology is banned by law.

Lost without his video games, Steven struggles to survive in this scary new world. The inhabitants are dangerous, sometimes deadly. The Land itself is a living being that deals out instant magical punishments to lawbreakers. And the truth about Tracy is terrible indeed. Homesick and horrified, Steven is desperate to escape.

Ignorant of the rules, it’s not long before he breaks them and ends up in the custody of the ruthless Fairy Queen. He learns she’s the living power behind the Land and its creatures, and she has no intention of setting him free. He also suspects she’s not telling him her true reason for keeping him prisoner.

Whatever her game is, Steven isn’t about to play it her way. His only chance of escape is to magic his own gateway home, so he attempts to build up some psychic muscle. The Queen uses all her guile to distract and torment him, and he lives in dread of being eaten alive by gruesome snake-like monsters that live in her garden, but the biggest block to his concentration is his own lack of faith. He still doesn’t believe it’s possible for a human being to do magic.

Can he believe in himself enough to forge the new gateway? And can he rely on the few friends he’s made to help him outwit the Queen?”

*I voluntarily reviewed a Reader’s Copy of this book*

The Gateway to Magic is a delightful fairytale filled with secrecy and intrigue that is sure to delight young and old.

Steven is a young boy who loves playing video games. When his cousin, Tracy, tricks him into pressing a hidden red button found on a stone they discover in the forest, the gates to fairyland are flung open. Steven is thrust into a realm filled with goblins, shapeshifters, and other scary beings. Hang on kids, we’re in for a wild ride.

One of the first entities Steven meets is Nigel, the shapeshifter, who seems to change into different figures that he can’t seem to control. I got many laughs out of the unusual things he changed himself into. However, Nigel’s character has a role. He becomes a friend and confidant of Steven and is instrumental in helping him to find a way out of fairyland. Nigel was my favorite character. Steven treated him badly, and still the little shapeshifter remained loyal.

All Steven wanted to do was to return home. Being a human in fairyland is a foreign experience. He is ridiculed and made fun of by the fairies and the rest of the elemental beings. At one point, Steven is starving because he doesn’t have a job. He steals some sweets to eat, and the Fairy Queen relegates him to the Forest of Pointy Fingers where he must bear his punishment. The only way out is to face up to the error of his ways.

It is when Steven realizes that it was wrong to steal that he leaves the forest of Pointy Fingers and meets Mr. Fildew, the Queen’s Dungeon Master. He is an organic type of creature who suffers from the power of suggestion. Finally, Steven meets the Fairy Queen, and she makes him her consultant. The three characters, Steven, Nigel, and Mr. Fildew have lessons they must learn to proceed in their lives in their fantasy world and beyond.

I guess that’s what I enjoyed most about this tale. You could read it with your younger children, and it would prompt great discussions on values and deep thoughts about growing up. Annabelle Franklin is a children’s writer, and I believe she throws the proper elements in her fantasy novel to encourage imagination in all kids.

If you love fairytales like I do, you will enjoy this sweet and imaginative tale. Take your time, and by all means, read it with your children. They will love it!

“I live on the South Gower coast, in an area of outstanding natural beauty that gives me plenty of inspiration. I hate housework and often wonder if there’s a breed of gruesomely grubby goblin whose sole purpose is to mess up people’s homes. My new book The Slapstyx explores this idea.

I like to think the fabric of material reality is riddled with holes leading to magical dimensions. When my nephew had a phase of video game addiction, I wondered how he would manage in a dimension where technology was banned: would he embrace the adventure or suffer withdrawal symptoms? This is how I came to write Gateway to Magic.

I spent most of my time in school writing stories, whether I was meant to be doing it or not. Since then I’ve had various jobs, played in two bands, taught children to play keyboards, written and performed in plays and made a short film. One of my scripts was shortlisted in a BBC scriptwriting contest, with positive feedback from Tony Jordan.

I share my home with Millie and Pearl, two beautiful rescue dogs who allow me to see the world through their eyes. They are also responsible for a lot of the mess.”

CAN YOU FIND ANNABELLE? 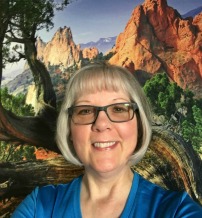 One thought on “#BOOK #REVIEW BY @COLLEENCHESEBRO OF “Gateway to Magic,” BY AUTHOR @ANABEL1FRANKLIN”