Shortlisted for the 2016 Man Booker Prize and chosen by David Sedaris as his recommended book for his Fall 2016 tour.

So here we are. My name was Eileen Dunlop. Now you know me. I was twenty-four years old then, and had a job that paid fifty-seven dollars a week as a kind of secretary at a private juvenile correctional facility for teenage boys. I think of it now as what it really was for all intents and purposes—a prison for boys. I will call it Moorehead. Delvin Moorehead was a terrible landlord I had years later, and so to use his name for such a place feels appropriate. In a week, I would run away from home and never go back.

This is the story of how I disappeared.

The Christmas season offers little cheer for Eileen Dunlop, an unassuming yet disturbed young woman trapped between her role as her alcoholic father’s caretaker in a home whose squalor is the talk of the neighborhood and a day job as a secretary at the boys’ prison, filled with its own quotidian horrors. Consumed by resentment and self-loathing, Eileen tempers her dreary days with perverse fantasies and dreams of escaping to the big city. In the meantime, she fills her nights and weekends with shoplifting, stalking a buff prison guard named Randy, and cleaning up her increasingly deranged father’s messes. When the bright, beautiful, and cheery Rebecca Saint John arrives on the scene as the new counselor at Moorehead, Eileen is enchanted and proves unable to resist what appears at first to be a miraculously budding friendship. In a Hitchcockian twist, her affection for Rebecca ultimately pulls her into complicity in a crime that surpasses her wildest imaginings.

Played out against the snowy landscape of coastal New England in the days leading up to Christmas, young Eileen’s story is told from the gimlet-eyed perspective of the now much older narrator. Creepy, mesmerizing, and sublimely funny, in the tradition of Shirley Jackson and early Vladimir Nabokov, this powerful debut novel enthralls and shocks, and introduces one of the most original new voices in contemporary literature.

“Eileen is a remarkable piece of writing, always dark and surprising, sometimes ugly and occasionally hilarious. Its first-person narrator is one of the strangest, most messed-up, most pathetic—and yet, in her own inimitable way, endearing—misfits I’ve encountered in fiction. Trust me, you have never read anything remotely like Eileen.” —Washington Post

“What makes Moshfegh an important writer—and I’d even say crucial—is that she is unlike any other author (male, female, Iranian, American, etc.). And this sui generis quality is cemented by the singular savage suburban noir of Eileen. . . . Here is art that manages to reject artifice and yet be something wholly new and itself in sheer artistry.” —The Los Angeles Times

“Eileen is anything but generic. Eileen is as vivid and human as they come . . . Moshfegh . . . writes beautiful sentences. One after the other they unwind — playful, shocking, wise, morbid, witty, searingly sharp. The beginning of this novel is so impressive, so controlled yet whimsical, fresh and thrilling, you feel she can do anything . . . There is that wonderful tension between wanting to slow down and bathe in the language and imagery, and the impulse to race to see what happens, how it happens.” —The New York Times Book Review

“The great power of this book, which won the PEN/Hemingway debut fiction award last month, is that Eileen is never simply a literary gargoyle; she is painfully alive and human, and Ottessa Moshfegh writes her with a bravura wildness that allows flights of expressionistic fantasy to alternate with deadpan matter of factness…As an evocation of physical and psychological squalor, Eileen is original, courageous and masterful.” —The Guardian

Thanks to NetGalley and to Random House UK, Vintage Publishing, Jonathan Cape, for providing me with an ARC copy of this novel that I have freely chosen to review.

I confess that I did look at some of the reviews on this novel before writing mine and they are very evenly divided. Some people love it and others can’t stand it. Yes, I guess it’s a Marmite kind of novel. Why? Having checked the novel in several online stores I noticed that it is classified under mystery novels, and if lovers of the genre of mystery read this novel I suspect many of them are bound to feel cheated or disappointed. Literary fiction, which is another one of the categories it is classified under, perhaps is a better fit.

The story is an in-depth look at a character, the Eileen of the title, who is narrating an episode of her own life, in the first person. It is not strictly written as a memoir. As I observed recently when reviewing a novel also told from the point of view of the older character looking back and reflecting at her young self (in that case it was Anne Boleyn), these kinds of books have the added interest for the reader of trying to work out how much of what is being told is filtered by the wishes of the older person to provide a positive portrayal of their young selves. In this case, what is quite shocking is that either that younger Eileen had no endearing features, or the older Eileen is trying to make herself feel better and reassure herself that she’s come a very long way, indeed.

Eileen is a lonely young woman (twenty-four at the time of the episode she describes), whose mother died years back, who has a very superficial relationship with her only sister (who no longer lives at home and who seems to be very different), and who lives with her father, a retired policeman, an alcoholic and paranoid man, who sees hoodlums and conspiracies everywhere. From the mentions she makes of her mother and her past experiences, her childhood was also sad and the opposite of nurturing, with both parents drinking heavily, and neither of them having any interest in family life (and even less in Eileen, as her sister seemed to be the favourite). She lives in a derelict house, drives an old car with exhaust problems, works at a young boy’s prison, and has no friends or hobbies, other than shoplifting and looking at National Geographic magazines. She lives in a world of fantasy, and even her physiological functions are bizarre.

In some ways, the novel reminded me of Notes on a Scandal by Zoë Heller because of the narrator, who was also very self-absorbed and had no empathy for anybody, although in that case, it wasn’t evident from the star. Here, Eileen sees and observes things carefully as if cataloguing everything that happens, but has nothing good to say about anybody, apart from the people she gets crushes on (however undeserving they might be).

The novel, full of details which can be seen as sad, shocking, or bizarre but humane depending on our point of view, hints from the beginning at something momentous that is going to happen and has influenced the choice of the point at which the story starts. A couple of new employees come to work at the prison and Rebecca, a young and glamorous woman (at least from Eileen’s point of view) becomes Eileen’s new obsession. She tries her best to deserve this woman’s attention and that gets her in some trouble that I guess it the mystery part (and I won’t discuss to avoid spoilers, even though as I said I don’t think the novel fits in that genre easily, although perhaps it shares similarities with some classics of the genre, and I’ve seen mentions of Patricia Highsmith. Ripley, perhaps?). From the reviews, I saw that some readers were disappointed by the ending, although it fits in well with the rest of the book. (And from the point of view of the character, at least, it feels positive.)

The novel is beautifully written (although the content itself is not beautiful by any stretch of the imagination), detailed and fantastically observed, and it works as an impressive psychological study, that had me wondering about all kinds of personality disorder types of diagnosis (although the whole family are depicted as very dysfunctional). It is difficult to empathise with such a character, although she seems to be an extreme representation of somebody with low self-esteem and completely self-obsessed (and at a lesser level, even if we might not feel comfortable acknowledging it, most of us have contemplated some of her thoughts or feelings at some point). She is relentless in her dislike for almost everybody and everything, but even her older self remains unapologetic (and well, it takes guts to just not care at all). I could not help but wonder how much better she is now, despite her words, as her comments indicate that she hasn’t changed an iota. If anything, she’s come into herself. But I guess self-acceptance is a big change for her.

I found it a fascinating novel, a case study of the weird and disturbed, pretty noir, but not a read I would recommend everybody. (After all, I’m a psychiatrist…) It is not a feel-good or a nice novel to read but it might be for you if you like weirdly compelling characters and are happy to go with a narrator who is not sympathetic at all. I don’t think I’ll forget Eileen or its author in a hurry. 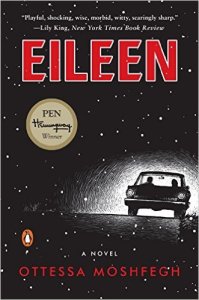 Link to an example one (areas you enjoyed, areas for improvement)

I am a language teacher, writer, and bookworm who worked for many years as a forensic psychiatrist, and also have a Ph.D. in American Literature, and an MSc in Criminology. I started publishing my stories, in English and Spanish, in 2012 and now have over twenty books available in a variety of genres, a blog (in English and Spanish), and translate books for other authors (English-Spanish and vice versa). In 2020 obtained the CELTA certificate as a language teacher, and offer Spanish and English classes. Writers and readers both in English and Spanish are my friends, colleagues, and allies, and after living in the UK for over twenty-five years, have returned home, to Barcelona, Spain, searching for inspiration for my stories. Oh, I also love the radio (I volunteer at a local radio station, Sants 3 Ràdio) and all things owl. Do feel free to connect with me. Here are: My website/blog: http://www.authortranslatorolga.com And for older content: http://OlgaNM.wordpress.com View all posts by olganm

2 thoughts on “#Bookreview EILEEN by Ottessa Moshfegh. A Marmite kind of novel”