I received a copy of this book for an honest review and I’m glad I did.

Levant Mirage takes snapshots from the headlines of the past few years to build a character and combines it with frighteningly realistic possibilities to give a story you pray never happens.

35 year old U.S. Army Major Adam Michaels is no James Bond, nor did he ever set out to be. What is he? He’s a man who rejects the easy path that being the heir to a shipping empire gives him in order to join the military, serve his country, and be a father. Right, no money other than what he makes as a Major in the Army. You don’t see jet flying, limousine riding, womanizing and all of that. I would trade in the 10 year old Corolla for something a little better though. Tap into the trust fund already.

Finding himself used as a scapegoat for a foreign relations nightmare, Michaels works out his days in the Pentagon pushing papers, and paying alimony, child support and the mortgage on his rising political star ex-wife’s house. You see the everyday life to some extent leading up to the changes in life the military can throw at you. You don’t control you in the Army. And there are times when that twists the guts out of Michaels.

Michaels is of a dubious parentage, with his father not being who he thought he was, but upon finding out explains a great deal. This in part leads to his choice of path in life. He wants to be his own man. He doesn’t want to be identified with a past that isn’t really what he thought it was.

But part of that past comes back in one night and changes a quiet world into a search to find the defense against a missile guidance system he created that is now in the hands of terrorists. Which terrorists? Who is the enemy? You won’t believe it. Or you will believe it but be surprised.

The believability of Levant Mirage is what makes it so freakin’ scary at times. Perhaps the guidance system isn’t real, or I hope it’s not. But I’m sure there is something like it out there. The enemy Michaels must fight against is out of this world. If he fails, billions die. If he succeeds?

Chase writes with detail and a knowledge base that gives the story realism. You are able to submerse yourself into Levant Mirage and you don’t get pulled out by oddities and unbelievable scenes. Some scenes are high energy and amped up, but still possible.

Being honest, the amount of detail is incredible at times and I could have done with a little less of the technological speak, but it doesn’t take away from the story. In truth, it adds the believability—you don’t have these leaps from action to intellect in the span of a few seconds. Okay, maybe you do but for a whole different reason, but I’m not giving those parts away. Ah, that does remind me of one scene that did cause me pause and have to reread in order to get it clear. In part, that was due to the surprise of those involved.

I enjoyed the handling of the terrorists. As you read you’ll develop ideas but never get to comfortable, you never know what is going to happen next, who is going to happen, or what the truth is until it’s almost too late. But there are clues along the way.

I would recommend Levant Mirage to those who like believable action thrillers. Clive Cussler’s Dirk Pitt and other NUMA series books come to mind, but not that fantastical or off the charts. Where Cussler takes you over the edge of believability at times, Chase keeps you here on earth and scares the life out of you with reality you can find in your neighbors living room. 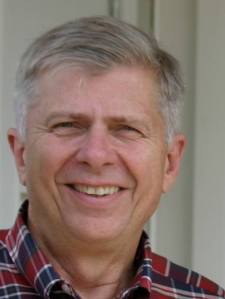 Oliver spent five years in a police department working narcotics and SWAT, and the next 22 in the FBI. Now he’s the author of Marsh Island, Blind Marsh, the first two installments of the Hirebomber Series. And now Levant Mirage, releasing Oct. 15, 2015.

Ronovan is an author, blogger and former educator who shares his life as an amnesiac and Chronic Pain sufferer though his blog RonovanWrites.WordPress.com. His love of poetry, authors and community through his online world has lead to a growing Weekly Haiku Challenge and the creation of  LitWorldInterviews.WordPress.com, a site dedicated to book reviews, interviews and author resources.  For those serious about book reviewing and interested in reviewing for the LWI site, email Ronovan at ronovanwrites (at) gmail (dot) com to begin a dialogue. It may not work out but then again it might.