The Fallen Angels of Karnataka is a novel that reminded me of a variety of genres. It’s a bildungsroman. Haakon, the protagonist, is a young man from a small Norwegian farm, naïve and not knowledgeable in the ways of life. The book shows us the process of his sexual awakening, how he discovers he is gay, his first experiences, his first rejection and heartbreak, his first love, and his first loss.

At a time when he’s lost everything and he’s been given what he thinks is a death sentence, an Englishman steps in, Charles, and makes him an offer that seems too good to be true. (Yes, we know all about it, but…) Haakon has always dreamt of travelling, and Charles offers him a dream contract to be his travelling companion, acting as a fairy godmother (or godfather) of sorts. He solves all the problems (including finding him medication for his newly diagnosed HIV infection) and does not seem to want anything back other than company and organisational skills. Of course, things aren’t quite as they seem, and the fairy tale turns much seedier and darker later in the book.

We follow Haakon and Charles in their travels, and the book could have become a travelogue. But although the novel provides beautiful vignettes and interesting observations and reflections about the places visited, their travel is described more in terms of an emotional and spiritual experience than a guide book. The journey our hero embarks on allows the readers to follow how the character grows, loses his —at times terribly annoying, at least to me— naïveté and manages to find not only a partner (gorgeous, good and who has suffered too, one of the fallen angels of the title), but also a worthy mission.

Hans Hirschi tackles a difficult subject in this book. One of the most difficult subjects. Paedophilia. The fallen angels of the book title are not really fallen, but rather dragged down by adults who either aid and abate others or are themselves abusers. The author shines a light on some of the least tasteful aspects of an already difficult to deal with topic, by highlighting the plight of children who are abused because they are seen as dispensable. We’ve all heard of sexual tourism and this is an extreme example of it. Although the topic is distasteful and something that plenty of readers would much rather not read about, the author manages to build credible characters that do not completely lose their humanity, even though some of their behaviours might be abhorrent. Haakon acts, in a way, as a foil and reflects the attitude of most readers, who would find it difficult to reconcile how somebody who seems so kind, educated, sophisticated and helpful could also abuse children. It is also a cautionary tale that reminds us appearances can be very deceptive.

The ending is positive, in keeping with the fairy-tale aspect of it, and although not perfect, the hero’s journey shares on universal themes and shows character development and a well-constructed plot and structure. We can’t help but hope that in real life all these kids will find a place and there will be no more fallen angels.

The book is beautifully written and the omniscient narrator allows us to see and understand things from different characters’ point of view (mainly Haakon’s but not exclusively). That helps up share in his experiences but at times puts us in a very uncomfortable position, being party to thoughts or desires and impulses of deeply flawed characters.

I would recommend this book to readers who dare to explore darker subjects. It will be quite a ride but the rewards will be plenty. I don’t know if the writer has thought about revisiting any of the characters again, but I for one would love to hear more of Mahender’s story (hard as it would be). And I will put other works by the author in my list of future reads. 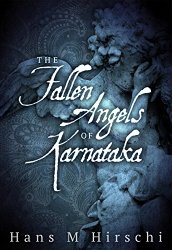