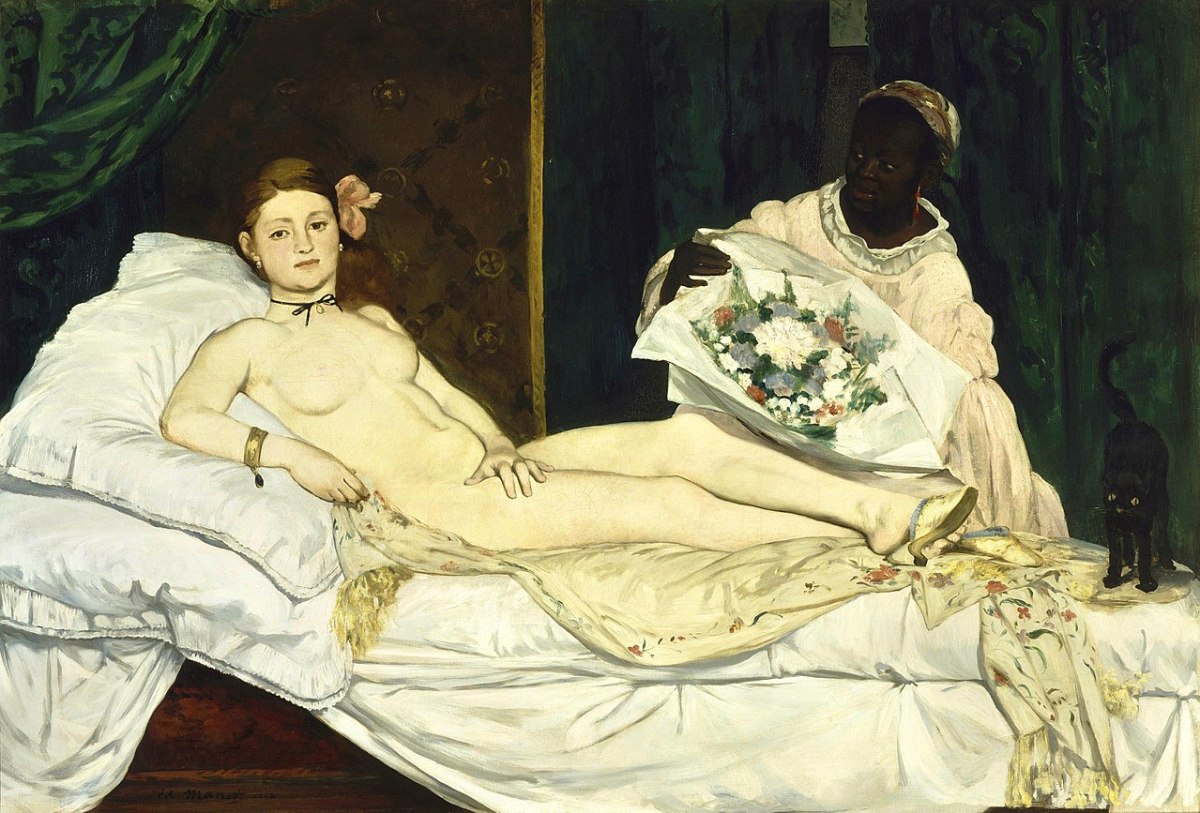 Drema Drudge’s deep interest in art led her back to college and it brought her debut historical novel, Victorine, soon to be released on March 17, 2020.

In this interview, Drema provides insights into the life of a female artist in 19th century Paris.

To begin, who is Victorine?

Victorine Meurent was Édouard  Manet’s self-professed favorite model. In all she sat for about 11 paintings for him. She also posed for artists Alfred Stevens, Edgar Degas, and more.

She came from a poor family, and not much is known about her beyond that she was born in 1844 and died in 1927. She lived with a woman named Marie DuFour for around the last twenty years of her life, presumably as her partner.

Indeed, she did go to art school. Her work was accepted by the Paris Salon on multiple occasions.

Much that history “remembers” of her is lies: that she supposedly died a young, financially ruined alcoholic prostitute. None of that is true. The few things we do know about her show that to be untrue.

An encounter with Olympia painted by Édouard Manet inspired you to write this book. Tell us a bit about this journey to finally writing Victorine.

I was primed before encountering Olympia to see the story in paintings by a previous literature class I had taken called The Painted Word. I wrote a short story of Olga Meerson (who modeled for Henri Matisse) which was published by the Louisville Review. Then when I took yet another literature class with the same professor, he put up a slide of Olympia and I sensed that the painting, that is, the model in it, had more to say. I wanted to know what. A novel was born.

Do you paint? Do you have an education in art?

I do paint a little, but a very little. I am finally allowing myself to learn a bit of technique. Previous to that I didn’t want to learn; I wanted to feel free to play and dabble without judging myself the way I judge my writing.

The only “formal” education I have in art is visiting art museums and reading about it. I get “hungry” for art if I’ve been away from the real deal for too long. But I’ve often wished I had an art history masters. I might get one, eventually.

What was it about Victorine Meurent that caught your fancy and kept your interest until you completed the book (and possibly beyond)?

In my research on Olga Meerson, I discovered that Olga was a painter, and yet here all anyone remembered her for was her modeling. Imagine my surprise when I discovered that yet another painting was calling to me, and the model in it, Victorine,  was also a forgotten painter. I had to write about her.

The more I researched her, the more I realized there wasn’t much to go on. I couldn’t see how anyone could weave a tale with so little thread, and yet, as a novelist, I had that very thread at hand. If not me, who?

Can I presume that you undertook significant research to write Victorine? How much? Where did it take you?

My research took me to Paris, first and foremost, its streets, museums, and cemeteries, I tried to imagine Victorine in the City of Lights.

How long did this book take from the first encounter of Olympia to its publication? What challenges did you encounter?

I encountered Victorine as Olympia in 2011, and my novel is just now being published in 2020. The first rough draft only took six months to write, but then it underwent some revisions, which slowed it down. When I found an agent, she shopped it for quite a while. In 2019 I was informed that it was finally going to be published, and I was more than ready.

What is the sociopolitical context of this story? Is it critical to this story you tell?

Oh my, yes. Women, and particularly poor woman, of the mid 1800’s in Paris weren’t considered much. And to aspire to be a painter in those circumstances? Almost impossible to achieve. That’s why I quickly realized Meurent must have had an indominable spirit, to have achieved what she did.

Then there was the birth of Impressionism and Modernism hand in hand. Both of these movements fought against the art establishment of their day. Enter Victorine as a stand-in for the art critics as Manet found his voice as a painter (and, most say, the Father of Modernism) as well. I wanted to explore the overlooked influence a model has on a work. As muse, yes, but the additions she makes that the artist cannot exclude, try as (in this case he) might.

Many believe they were lovers. I do not. I think they respected one another, eventually, professionally, although their artistic differences are thought to be what drove them apart in the end.

Meurent decided Manet was being too risky while seeking the approval of the Salon.  He refused to stay the expected course but also refused to totally embrace himself. He wouldn’t give up his need for acceptance, which he didn’t receive until just before he died and, of course, after. Meurent literally couldn’t afford to follow her fancy, painting more traditionally than Manet so she could sell her art.

As to what attracted him to her, she dared tell him the truth about his art. Other than the critics, no one dared. Manet was not a man who could handle criticism, and yet art cannot grow without it. I believe Meurent, as his model, managed to be that bridge for him: she was socially beneath him enough that he could disregard her criticism if he liked, and yet the honest artist part of him was able to embrace it. Or that’s my story. I have no way of knowing if that was true.

Meurent and Manet were fond of one another, essential to one another in ways they couldn’t articulate to themselves or others, I believe. You don’t have to see someone every day or every year to know how important you are to their purpose on the planet. I believe they were just that crucial to one another. It wasn’t love. It was something else, something I spent a large part of the novel trying to define.

What is, in your view, Meurent’s inner life?

Meurent’s narrative is a bit performative, so I’m not surprised by the question, and yet if she had been more inner directed aloud, the novel would have been in danger of tilting toward the maudlin. Neither she nor I wanted that!

She lived her inner life on the canvas and in her musings as she painted or was painted. Her life was a work of art, first by others, then by herself.

It wasn’t as if she hid her desires or her vulnerability from the reader. By pointing some things out, she was admitting, gingerly, what she wanted and needed. The main goal of the story, and her goal as narrator, was to bring herself back to history as a painter. It was to show that art can serve as lover.

She could receive and understand art and humanity with a generosity and intelligence that few have.

More than that, I think she’d prefer to keep to herself.

What degree of artistic license did you take with Victorine and the events in the book?

I did what the book required. I strove to tell the truth, although often the factual truth wasn’t available, so I had to fabricate pieces of the story from the bits I had at hand.

You have chosen to begin the book with Manet and Meurent’s first meeting in 1862, and have tied her to Manet throughout the book until her acceptance into the Salon de Paris. Why? And why this period?

I quickly realized in my research that Manet played an extremely important part in Meurent’s life. I first conceived her story not as a novel, but more as a series of linked stories (that being the trend at the time) with each story centering on a painting. Since Manet was the artist whose paintings of her were most known, that seemed the place to begin.

One of the many themes in this novel is breaking away from Bloom’s anxiety of influence; that is, learning who you are versus your mentors. Her formation as an artist sprang directly from being able to detach herself from Manet’s studio.

As I read Victorine, it seems Meurent is explaining herself or justifying her actions and motives in relation to Manet and on occasions, Alfred Stevens, instead of the reader (like myself) gaining access to her independent inner world of what drives her. Was there a particular reason for this?

I don’t know that it was conscious on my part, but it makes sense. Meurent was the object of the male gaze from a child on, with first her father painting her. Part of her cycle of growth was breaking away from being the object. It was a process; she protected herself from them and from us as readers as she went along. I’ll allow it.

It was fascinating to see the maturing process of Victorine, young muse and aspiring artist, to Meurent, accomplished and confident.  I enjoy the triangulation of relationships. Did you decide to do this? Why?

If Meurent is unfair to anyone in the novel, if she has a blind spot, it’s that she underestimates Suzanne Manet. That’s her (professional) jealousy talking. Suzanne’s retribution is my way of showing the reader the truth.

If there is one thing you want the reader to take away from the book, what would it be?

My goal, first and foremost, is to return Victorine Meurent and her contributions to art herstory. If the reader thinks of Victorine not as just a nude on a canvas, but as a living, growing human being who did, in reality, go to art school and make contributions even to the prestigious Paris Salon, I will have done my job. If she lingers with the reader, that’s a bonus for which I surely hope.

Are you working on a new writing project now? And if so, what is it and does it involve art as well?

All of my books are likely to contain art, though I have a loosely connected concept for them: I want to eventually write about all of the arts. Next up, music. I juxtapose the worlds of country music and…Virginia Woolf!

How fascinating! I will be looking out for its release.  Finally, where and when can readers get their hands on Victorine?

Victorine’s release is scheduled for March 17, 2020. It’s available for preorder on Amazon and Barnes & Noble. Once out, it will also be available on the Fleur-de-Lis website.