Also get the rest of the Pirate Tales series FREE by clicking HERE!

It’s MY Birthday and YOU get the GIFT!

Get my debut Historical Fiction, Action-Adventure

No sign ups for newsletters or anything. Just go and get it!

Check your Amazon. Below is the American Amazon link. 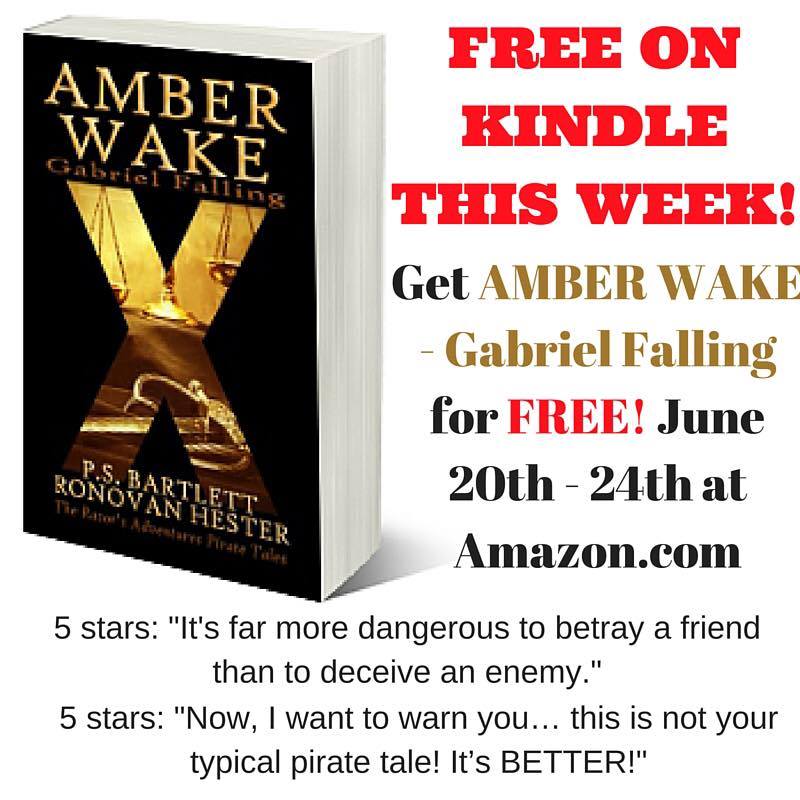 The wait is over. My debut novel Amber Wake: Gabriel Falling, written with Award Winning Author PS Bartlett is available for Pre-Order Now! The Prequel to all of the The Razors Adventures Pirate Tales, of which there are currently 4 titles with another in the works if not already on the way.

The autumn of 1705 brings Royal Navy Captain Gabriel Wallace to face off against an enemy within the ranks of the Admiralty itself that threatens his career, his reputation, his family, and something even more far-reaching in its plot.

Court-martialed and with Admiral Chambers, the mastermind fearfully known as the Chambers of Hell, out for his destruction, Wallace finds he has allies willing to face the might of the mightiest power on earth, with some allies in the most unlikely of places. The crew of his former command, the Majesty’s Venture, mutinies from the Royal Navy. With capture by his enemies close behind, Wallace agrees to become captain once again.

With a ship at his command, Captain Gabriel Wallace sets out to fulfill his mission, the completeness of which only he knows.

Now a pirate by situation, Wallace sets out for the Colonies and the Caribbean. Will his crew remain loyal as they leave a life the rule of the Royal Navy behind? Will  his lifelong friend Miles Jacobs follow Wallace’s lead without knowing the whole story? Finally, will  the young Lieutenant Maddox Carbonale remain a follower or try to become captain himself?

With these questions in his thoughts, Gabriel Wallace wages war on Chambers and goes after the largest haul in the history of the Spanish Main. Whom does Wallace meet along the way? To whom are his loyalties to: vengeance or something more powerful?

If you love tales of adventure, of the sea, of the struggles of men, and nods to history, this is your book. Read Amber Wake: Gabriel Falling and you’ll have a new appreciation for all of The Razor’s Adventures Pirate Tales.

It’s been a long year of nervous excitement on my part, waiting for this week.

My big goal in writing this book was to become a published author. Sounds like a duh type of thing, right? Well, it’s not for the reason you think.

I worked hard, even agonized over my creations, because I wanted my son to be proud of his daddy.

Two and a half years ago I suffered a fall in my home. As a result I ended up with a Grade 3 Concussion, and the discovery of multiple herniated discs in my spine beginning with my neck. There are a lot of other problems, but that’s enough of that story.

My son has been tough through it all. Considering he’s 11 now, it’s been difficult for him. Now he has something he can tell his friends that his daddy has done.

Now for the book, right now PS Bartlett and I have a good price set for the Pre-Order phase. She is even lowering the prices on her other books in the series for a short time. Of course those prices won’t always be that way.

Help us get to the top with my debut. That would put a surprise of an ending to this little story of mine. Not really an ending. I’m still writing. It will be one great thing though.

Visit Amazon to Pre-Order. Here are a few to click to now.

And wish my son good luck with his baseball tryouts in Little League coming up Saturday. Maybe he’ll have someone who can catch better than I can. This past Saturday I suffered my first black eye ever. I might resort to an eyepatch if any photos are needed for guest spots during book promotion.