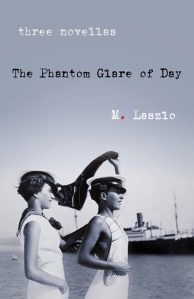 What would be your one sentence elevator pitch of what your book is about?
In this trio of novellas, three game young ladies enter into dangerous liaisons that test each one’s limits and force them to confront the most heartrending issues facing society in the early twentieth century. The Phantom Glare of Day is a compelling interrogation of who gets to decide what is right and what is wrong.

[The novellas are set during the height of WWI and post-WWI Europe.]

What book/author/movie/TV show/song might a potential reader compare your book to in order to get an idea of its feel and why?
The Phantom Glare of Day might best be described as traditional, twentieth-century melodrama suffused with the following: Goth youth culture, the film Nosferatu, lots of Germanic brooding, the poetry and symbolism of Nietzsche, and a ravishingly beautiful figure-skating ballet just for good measure.

Why did you choose this topic for your book?
This topic chose me. These novellas arise from a deeply held obsession with grasping the essential ethical issues that face society. By writing the book, it is my hope that the novellas may challenge readers to think about and to come to terms with those same heartrending questions.

What led to your choosing the setting for your book? In part your mention of steampunk as used in your book.
Having traveled to London, Paris, and Prague, and having kept travel diaries for those beautiful cities, there was no way to avoid my setting stories in those remarkable places. Interestingly, though, my impressions of Prague were always informed by the genre of steampunk. What I mean by that is that Prague is the city with which I’ve always associated the science-fiction play Rossum’s Universal Robots. Because of this, Prague inspired me to write about steampunk/primitive robotic technologies—as such, these peculiar technologies and themes and obsessions appear in that tale. With regard to Weimar, that’s the most peculiar question for me because I’ve never been there. Still, the history of das Bauhaus has always fascinated me—and because of this, there was no way to avoid the temptation to set a tale there.

How did you come up with the title of your book?
The Phantom Glare of Day comes from a line in “Butterflies”—a WW-era Siegfried Sassoon poem. The title seemed perfect to me because various world religions have always associated butterflies with the immortality of the soul. For me, that metaphysical idea resonates because these three novellas amount to a new kind of metaphysical storytelling.

How has your world traveling impressed itself on your writing?
Nothing has impressed my writing more than my travels to London, where I became fascinated by British colloquialism and phraseology. Nothing else makes British characters come to life more than giving them authentic voices as they engage one another in dialogue. In short, dialogue has to be real. Characters must talk the way people really talk. This comes down to the fact it is the vernacular that makes characters and their stories seem genuine. My travel diaries provided me with all kinds of descriptions of various places, of course; nevertheless, my travel diaries were most important to me in that they included many, many lists of those remarkable terms that only the Brits use.

What will connect the reader to the story?
These novellas tell of how people struggle with issues that anyone can find relatable: school bullying, abortion, euthanasia, political extremism, and homophobia. As such, any reader should be able to connect with the characters. At the same time, the narrator’s voice remains solemn and philosophical; moreover, the writing is suffused in objective correlative—symbols intended to resonate with the reader’s unconscious mind. If the reader really gives my work a chance, the reader can and will connect.
Remember, though, when you read The Phantom Glare of Day, you’ll quickly see that it’s like nothing you’ve ever read before. Perhaps that’s why the work is fated to get so many mixed reviews. This work is weird and revolutionary in its style.

Did you have difficulty deciding your book was ready to publish?
Yes and no. Leonardo Da Vinci said it best: “Art is never finished, only abandoned.”

What genre(s) and reader ages would your work fit best?
As for genre, there are different possibilities: coming of age, urban fantasy, historical fiction, metaphysical fiction, melodrama, and perhaps even magical realism. In truth, the work is trans-genre. Also, who cares what the genre is? It’s literature. And it’s meant for anyone mature enough to embrace the idea of freethinking and/or open-mindedness and/or freedom for the sake of freedom.

What’s your next project idea?
My next project promises to be a complete mind-scramble. In the coming book, it is my intention to take the reader on a journey alongside a figure who resolves the riddle of the universe—and in the final movement of the tale, the character will in fact explain the riddle of the universe. For that matter, too, the answer provided will be accurate. And that is my pledge. 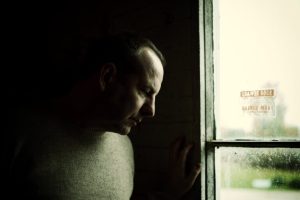 M. Laszlo is the pseudonym of a reclusive author living in Bath, Ohio. According to rumor, he based the pen name on the name of the Paul Henreid character in Casablanca, Victor Laszlo.

He has lived and worked in New York City, East Jerusalem, and several other cities around the world. While living in the Middle East, he worked for Harvard University’s Semitic Museum. He holds a bachelor’s degree in English from Hiram College in Hiram, Ohio and an M.F.A. in poetry from Sarah Lawrence College in Bronxville, New York.

His next work is forthcoming from SparkPress in 2024. There are whispers that the work purports to be a genuine attempt at positing an explanation for the riddle of the universe and is based on journals and idea books made while completing his M.F.A at Sarah Lawrence College.

The Phantom Glare of Day is available at Amazon.

© 2014-2022- Ronovan Hester Copyright reserved. The author asserts his moral and legal rights over this work.