Historical Accuracy Must Come First:  The Real History of The English Patient and Operation Condor

In May 1942, just before German General Erwin Rommel, the Desert Fox, launched his offensive to drive the British Eighth Army out of Egypt and take the Suez, the German Intelligence Service (Abwehr) sent a two-man espionage team to Cairo. Operation Condor, as it became known, proved to be the most legendary and historically misrepresented intelligence operation in the WWII North African campaign. 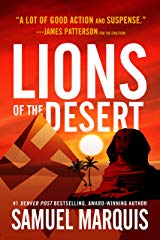 In Lions of the Desert: A True Story of WWII Heroes in North Africa, I tell the tale of the famous Operation Condor and 1941-1942 Desert War between Rommel’s Afrika Korps and Eighth Army, based on recently declassified British and U.S. Military Intelligence records. The romantic Condor story has been told many times before—most famously in Michael Ondaatje’s 1992 Booker Prize winning novel The English Patient and the 1996 Oscar-winning film of the same name—but until recently virtually every fictional and factual account has been historically inaccurate. That is precisely why I had to write my book.

The reason that the Condor story has been shrouded in mischaracterization and embellishment is simple: prior to the 2006 public declassification of large numbers of WWII government documents, the only historical records on the subject available to the general public were those written by the main protagonists, who had access to only limited information and were not privy to the larger military-intelligence picture. In addition, records have conclusively shown that these participants, despite laying down a solid foundation of verifiable facts, have in a number of critical places distorted and embroidered the Condor narrative to enhance their own role in history or embroider the story, making it difficult for subsequent researchers to separate fact from fiction. I had no idea of these shortcomings when I set out to write my book—but once I discovered them, the opportunity to set the record straight and tell the true Condor story became my raison d’être for penning my work.

The narrators of these early first-hand accounts included: Anwar el Sadat, the Egyptian Army officer, nationalist, and later President of Egypt (Revolt on the Nile, 1957); Lieutenant Johannes Eppler, the German spy in the Operation Condor affair (Rommel Ruft Cairo, 1960, later translated as Operation Condor: Rommel’s Spy, 1977); Leonard Mosley, a British war correspondent in Cairo at the time of Operation Condor, who conducted extensive interviews of Eppler prior to the German spy penning his own version of events (The Cat and the Mice, 1958); and Major A.W. Sansom, the head of British Field Security in Cairo who played a prominent role in the capture of Eppler and his espionage cohort Heinrich Gerd Sandstette (I Spied Spies, 1965). While accurate in many respects and unquestionably entertaining, these subjective first-hand accounts have one fatal flaw in common: they exaggerate the espionage accomplishments of several of the key players in the Condor story and, consequently, draw conclusions that are not supported by reliable historical documents.

Without access to the declassified materials and thus the bigger picture, subsequent writers on the subject—Anthony Cave Brown, Bodyguard of Lies (1976); David Mure, Practice to Deceive (1977) and Master of Deception (1980); Nigel West, MI6 (1983); and Richard Deacon, ‘C’: A Biography of Sir Maurice Oldfield (1985)—could not help but fall into the trap of relying heavily on the embellished accounts of the main protagonists. Following in a similar vein, the bestselling historical fiction novels by Ken Follett (The Key to Rebecca, 1980, made into a 1989 TV movie) and Len Deighton (The City of Gold, 1992) used both the original sources and the subsequent embellished works as the basis of their books, making for great entertainment but questionable historical accuracy with regard to the significant details of the North African campaign and Operation Condor.

As it turns out, the Condor story needs no embellishment. The real-life protagonists, while admittedly more prosaic than their highly fictionalized doppelgängers, are still fascinating in their own right. That became my overarching goal in Lions of the Desert: to tell the real story—a story that has captivated the minds of authors, historians, and filmmakers for the past three-quarters of a century but that, until quite recently, virtually no one has been able to get right due to lack of access to the full truth.

With that in mind, I told the story through the eyes of six of the main historical figures who lived through the larger-than-life events in Egypt and Libya in 1941-1942: Scottish Lieutenant Colonel David Stirling, founder and leader of the Special Air Service (SAS), a brigade of eccentric desert commandos that raided Axis aerodromes and supply lines; Rommel, who as commander of the legendary Afrika Korps very nearly succeeded in driving the British out of Egypt; Egyptian Hekmat Fahmy, the renowned belly dancer, regarded as a Mata-Hari-like German agent in previous accounts but in fact a far more intriguing and ambiguous character in real life; Colonel Bonner Fellers, the U.S. military attaché in Cairo, who was privy to critical Allied secrets in the North African theater and inadvertently played an important role in intelligence-gathering activities for both sides in the campaign; and Sansom and Eppler, who played a game of cat-and-mouse and whose real-life stories are finally told.

Of the above historical figures, Eppler, Sansom, and the Egyptian belly dancer Hekmat Fahmy have been the most grossly distorted in previous accounts—primarily because of Eppler’s and Mosley’s embellished stories that set the tone but also due in part to the security chief Sansom’s self-serving recording of history in his own book. History has shown that Eppler was not quite the master spy portrayed in his own imagination or in books and movies; Hekmat was no Mata Hari at all but was a legendary entertainer and important member of Cairene high society; and Sansom was not the Sam-Spade-like sleuth who solved the case but one of several diligent British intelligence officers who helped catch the two German spies. In fact, Operation Condor ultimately proved to be more comical farce than an intelligence success story; in the end, the German operatives that have been portrayed as virtuoso master spies in books and the silver screen for several decades emerge with little credit from the affair. But it is precisely the sloppily real and deeply flawed human element that makes the Condor story so engaging.

From my standpoint, therefore, it was critical to present Eppler and Fahmy not as the ruthless master German operatives and Sansom as the master British sleuth of previous highly fictionalized accounts, but as the people they truly were with warts and all. To accurately portray the historical figures in the book, I placed the characters where they actually were during a given recorded historical event and use, to the extent possible, their actual words based on recently declassified British and American case files, contemporary transcripts, trial documents, memoirs, and other quoted materials. Like Michael Shaara in his excellent historical novel about the Battle of Gettysburg, The Killer Angels, I did not “consciously change any fact” or “knowingly violate the action.” The interpretations of character and motivation were still ultimately a part of my overall imaginative landscape, but the scenes themselves and the historical figures were deliberately rendered as historically accurately as a non-fiction history book.

Why? Because truth in historical fiction is paramount and not something to be compromised. Because all the other important things in a novel—sympathetic characters, edge-of-your-seat suspense, and unexpected twists and turns—spring from portraying ones beloved heroes and villains in all their glory and infamy just like the real-world, flawed historical figures they were in life. The bottom line is that history itself provides plenty of conflict, tension, and drama, and does not need to be consciously changed to generate more excitement. For Lions of the Desert, I felt it was up to me as the author to select those scenes of historical significance and bring them back to life in vivid color, while filling in between known historical events with scenes that shed light on the historical figures’ true motivation and character as revealed from the recently declassified documents and latest research.

While recently declassified government files form the backbone of Lions of the Desert, the original eyewitness accounts of Sansom, Eppler, Mosley, and Sadat have still proved useful—but only where supported by other eyewitness accounts, government records, or wireless decrypts. As David Mure, author of Master of Deception, states, “The Condor story has been told many times, always with new dimensions and variations; it is a tangled web indeed.” Not anymore. With the relevant declassified WWII records now available, the true Condor story can now be told—and that is precisely what I have done. Because telling the truth and getting the story right matters in historical fiction.

In fact, nothing matters more.

One thought on “Historical Accuracy Must Come First:  The Real History of The English Patient and Operation Condor”