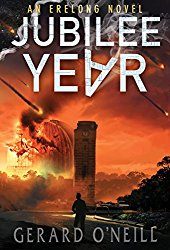 I received a copy of this book for an honest review.

Jubilee Year-A Novel is the story of what would happen if our sun had a long-lost twin that had been traveling the universe and was now on its way back home. And governments knew it but didn’t tell the populace. Elite saw it coming and were prepared for its happening but the general population was left on its own. In Jubilee Year Gerrard O’Neill gives us a taste of what happens when a few people discover the truth and try to survive the coming catastrophe.

18 years old Storm just wants to figure out what to do with his life while dating 22 years old Penny. Penny’s father is director of one of the most famous observatories in the world and thus in a position to see what’s happening in the solar system we live in. That knowledge throws Storm into an adventure he never expects as he gets caught up in protests, paramilitary groups, and a super-secret agent of the Australian government.

The relationships in the book are not bad. Although the Storm and Penny dynamic leaves something to be desired at times. The other connections in the book are pretty good with the exception of how a character named Darren turns out. I was a bit surprised about him and that seemed a little forced to me. I could see sort of why it was thrown in but maybe it could have been handled better, maybe not so rushed.

I don’t know science of the nature discussed in the book, but I don’t think you need to. It is all explained well and made you believe what is being stated. That’s what counts.

The main issues I had with the book were the head hopping within scenes where I couldn’t tell who was talking or thinking. And there are some proofreading issues that are evident. These two factors made reading not as enjoyable as it could have been.

Overall it was a good story idea, a quick read that kept you turning the pages to see what would happen next.

I gave Jubilee Year-A Novel 3 out of 5 stars instead of a 4 because of the head hopping. It really took away from the flow of reading. The story itself is good and even being over 400 pages I read it in one day. So I do recommend the book for those who like the apocalyptic type of genre.

2 thoughts on “#BookReview of Jubilee Year-A Novel by @GONeillBooks”