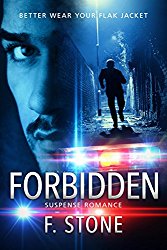 Captain Sharif’s police compound has been breached. Fifteen Americans murdered. CIA agent Frank Hutchinson has proof the cop is lying and has him in his crosshairs, eager to exact revenge. Captain Sharif must please his corrupt superiors; and yet see justice served, and abide by the Koran. He’s in hell, with no way to escape – either be buried alive or suffer Allah’s wrath. In the balance hangs the life of Eliza MacKay, witness to the massacre. He’s drawn to her courage and discovers her ‘take no shit’ personality warrants respect. Even so, her struggle with PTSD may get both of them killed. Desperate, Sharif initiates an act more forbidden and fatal.

One thing about Forbidden by F. Stone you need to know is that it’s set in the year 2047 and the Muslim countries in the Middle East with a few exceptions have formed into one large nation. I think of it like the old Soviet Union. Iraq is the center of power and that’s where this story takes place.

You quickly forget about the future setting because everything in the story is still very much present day except for the political setting, which doesn’t play a huge part in the story.

I really liked the book. There were definite elements that needed to be handled well, especially with CAPTAIN SHARIF’S faith. The author has obviously done her homework and that shows up primarily around how Sharif handles his interactions with ELIZA MACKAY.

But enough about that. This book is action from the beginning to end. A great who is doing what to whom. I’m pretty good at figuring things out but was surprised in the end about who was not involved in the murdering of the 15 Americans.

The writing is fast paced and I read it in a day because of not wanting to put it down. Throw in the romance elements and you have a well balanced story that gives you a chance to breathe between the action moments. The romance part isn’t overplayed and doesn’t detract from the story at all.

MacKay’s traumatic history and PTSD are used to great effect in the relationship between her and Sharif. Some of it is a little unexpected but overall I think it was exactly the way it should have been.

I recommend the book for thrill seekers and action junkies.

Get FORBIDDEN on AMAZON by clicking HERE.

One thought on “#BookReview of Forbidden by F. Stone.”