In the author’s words:

“The riveting #1 international bestselling novel about the quest across centuries by two intrepid women in different eras to reunite the pieces of a powerful, ancient chess set.”

“A fabulous, bejeweled chess set that belonged to Charlemagne has been buried in a Pyrenees abbey for a thousand years. As the bloody French Revolution rages in Paris, the nuns dig it up and scatter its pieces across the globe because, when united, the set contains a secret power that could topple civilizations. To keep the set from falling into the wrong hands, two novices, Valentine, and Mireille, embark on an adventure that begins in the streets of Paris and leads to Russia, Egypt, Corsica, and into the heart of the Algerian Sahara.

Two hundred years later, while on assignment in Algeria, computer expert Catherine Velis finds herself drawn unwillingly into the deadly “Game” still swirling around the legendary chess set—a game that will require her to risk her life and match wits with diabolical forces.” 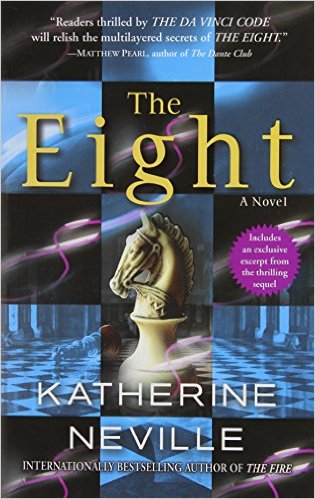 “The Eight,” sweeps you along on a fantastic journey through history beginning with the French Revolution in France, to Catherine the Great in Russia, to Corsica, onward to the enigmatic Sahara, and finally ending in the United States in the late 1970’s. History is a predominant theme which lends credibility to the plot. I was intrigued by the sheer number of historical figures and events that climaxed my reading journey. I was virtually swept off my feet!

At the center of the plot is a mystical chess set once owned by Charlemagne. An ancient myth has shrouded the actual purpose of the Montglane Chess Set. It is believed that an otherworldly power and a secret so great that it could destroy civilization as we know it, is contained within the ancient relics.  Anyone who possesses the entire set will have a power that is unsurpassed in the world. The secret is kept with mystical codes and symbols. Only the stories of the ancients can reveal its true purpose.

The chronicle is woven between two different time periods, with Mireille, the novice nun, during the French Revolution and then with Catherine, a computer programmer in late 1970’s America. The detail is impeccable. For me, Mireille’s story was the most exciting and the most thought provoking. Mireille’s quest to unravel the secret of the Montglance Chess Set becomes her life mission which sets the “game” in motion for centuries to come. It is Catherine’s mission hundreds of years later to be one of the players in this transcendent chess game of life.

I knew next to nothing about the “game” of chess. What I did come to understand through my reading of “The Eight,” is the psychological aspect of the game itself. If you love chess, you will enjoy this book. Throw in the Fibonacci Code, the Free Masons, alchemy, mathematical codes, and the ancient mysteries of the universe, and I was hooked.

The novel is long. However, the reward is in discovering the true purpose of the Montglane Chess Set. The ending is spectacular and worth the wait. Catherine Neville skillfully weaves a tale filled with suspense and intrigue that will keep you up reading into the wee hours of the night to find out what happens next!

Born in 1945, Katherine Neville has had an extraordinary life, living in almost every state in North America. Aside from her work as an international bestselling author, she has worked as an international computer executive, a painter, photographer, and a waitress. Katherine lives in Virginia, Washington and Santa Fe, New Mexico.

Watch this video as Katherine Neville discusses her novel, “The Eight.” 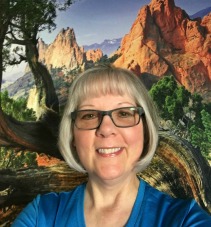 4 thoughts on “#BOOK REVIEW BY @COLLEENCHESEBRO OF “THE EIGHT,” BY KATHERINE NEVILLE @KNEVILLE2015”