* I received a copy of this book from the author in exchange for an honest review which follows. *

After the Demonic War

Maddison Wood is a Watcher, a mercenary warrior, appointed by the Race Alliance to serve within a specific hunter cell after the Demonic War in which the mortal realm was destroyed. Demons, part of the Fractured, are a group of lost souls who continue to roam the earth and refuse to leave. The Fractured are the ones responsible for the Demonic War. They have one goal and that is to destroy those that belong to the higher realms.

London has lost its appeal and people are afraid to leave the inner confines of the city. Maddison’s responsibilities are to protect and serve the Fallen; guardian angels who have fallen to Earth to prepare for the next insurrection. Maddison Wood is a witch, the first of her kind appointed to such an honor.

An unlikely alliance forms with a Witch, a Hympe, a Guardian Angel, and a Prime

Maddison, along with her side-kick, Donovan, a mercenary warrior Hympe whose gifts are that of an empath, has been assigned a new mission. Donovan is a formidable ally to Maddison’s team. Once he opens up to a connection through his sense of touch he can find out everything they needed to know about an entity. A rare gift, indeed.

Zara, one of the select guardian angels, who also possesses empathic powers, has taken the fall and Maddison and Donovan are sworn to protect her and guide her through her transition. Her soul must be protected at all costs. With the help of Obadiah, a Prime who is a “God” of epic proportions who has also fallen, the group takes on Draco, the leader of the Fractured, and the original lost soul.

“The Fallen,” is an action-packed journey into a post-apocalyptic alternate reality where angels and demons clash in an age-old battle between good and evil. I was immediately caught up in the lore of the creatures and of the detailed society of the Race Alliance that fought against the tyranny of The Fractured.

I found the battle scenes to be completely realistic and believable. A few times, I think I caught the glint of steel in my eyes from the knife wielding Maddison, as she battled the demons that pursued the group. Having served in the military myself, I could identify with the character of Maddison, portrayed as a strong, confident and capable woman fulfilling her destiny as a soldier. Maddison is full of rich humor and a true delight as a character.

This was my first experience with Melissa Barker-Simpson’s writing. I was not disappointed. She weaves a tale of suspense and intrigue that leaves you wanting more of this story and the characters she has crafted. Subtle hints are left as to the future direction of the story line, spread like breadcrumbs along a path, urging the reader to continue on the mysterious trek with the characters in the hope of winning the war. I look forward to the next book in the Fractured Series because I suspect, there is more excitement lurking in the dark recesses of this author’s mind. 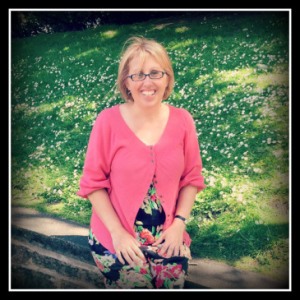 I’ve been writing since, well…since I was knee-high to a grasshopper. I often look back on those earlier stories, and apart from laughing at the heavy-handed drama, or cringing at my inexperience, I am reminded that I have always lived in other worlds.

My first novel was published in 2008, and I love nothing more than working on a new project. The voices inside my head invariably pull me in different directions, so although I try to work on one thing at a time, those who know me would tell you it doesn’t always work!

I have a full-time job which, though does not involve writing per se, incorporates my love of language. As a British Sign Language Interpreter, I get to translate information between two languages which is (mostly) fun.

I have two beautiful daughters who bring me great joy. They also keep me grounded, because otherwise I would have my head in the clouds permanently!

Colleen M. Chesebro is an American Novelist & Poet who loves crafting paranormal fantasy and magical realism, cross-genre fiction, syllabic poetry, and creative nonfiction. She loves all things magical, which may mean she is experiencing her second childhood—or not. That part of her life hasn’t been decided yet. A few years ago, a mystical experience led her to renew her passion for writing poetry and storytelling. Colleen sponsors a weekly Syllabic Poetry Challenge, called Tanka Tuesday, on her blog where participants learn how to write traditional and current forms of haiku, senryu, haiga, tanka, gogyohka, tanka prose, renga, haibun, cinquain, Etheree, nonet, and shadorma poetry. Colleen's syllabic poetry has appeared in the Auroras & Blossoms Poetry Journal, and several other publications. In November 2017, she won the “Little and Laugh” Flash Fiction Contest sponsored by the Carrot Ranch Literary Community. In 2018, she won first place for the “Twisted Travel” category. In 2019, she placed second in the Three Act Story category, with her piece called “The Game.” Colleen is a Sister of the Fey, where she pursues a pagan path through her writing. She lives in Arizona with her husband and black cat, Freyja. When she is not writing, she is reading. She also loves gardening and crocheting old-fashioned doilies into works of art. View all posts by Colleen M. Chesebro

5 thoughts on “#BOOK REVIEW BY @COLLEENCHESEBRO OF “THE FALLEN,” BY AUTHOR @MBARKERSIMPSON”