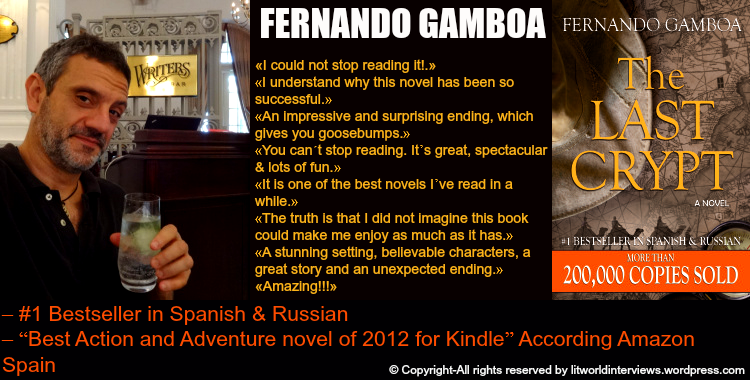 As you know, for the last few weeks I’ve been bringing you the work of some authors who although well known to Spanish-speaking (and reading) audiences, you might not be very familiar with. And I’ve taken the chance to ask them a few questions so you can know them better. Today I’m pleased to bring you a writer from my home city, but who is a citizen of the world. Fernando Gamboa.

Fernando Gamboa (Barcelona, Spain, 1970) has devoted most of his adult life to traveling through Africa, Asia and Latin America. He has lived in several countries and worked as a scuba diver, Spanish teacher, entrepreneur, poker player and adventure guide. In the year 2007 he published his first novel La última cripta (The Last Crypt) and since then he has published five more novels: Ciudad Negra (Black City), La historia de Luz (The Story of Luz), Guinea, Capitán Riley (Captain Riley), and Tierra de nadie (Nobody’s Land) just over a month ago. Thanks to the hundreds of thousands of books he has sold in Amazon, it could be said that he is the independent Spanish author most read in the world.

When and how did you start writing?

I began to write in 2005 as a result of serious back injury that left me practically unable to move for two years and as I had to stop traveling during that time, I had no other option but to travel using my imagination. The Last Crypt was born from that time, and as a consequence, what has become my literary career.

Could you tell us something about your experience as an independent writer?

My first two novels were published by a traditional publishing company but the experience wasn’t a good one, so when Amazon appeared in Spain, I jumped on the train of the self-publishing and I carry on like that, very happy to have taken that step. I strongly believe that self-publishing is the present and will be the future of the literature of the world and I recommend all authors to join that revolution, so beneficial to those of us who want to turn writing into our way of life.

Do you have a moment you remember especially of your experience as writer?

For me the best has always been the affection the readers have shown me. I know it may sound trite but when hundreds of readers write to you to congratulate you personally on a novel and to thank you for making them dream through four hundred pages, it’s very touching.

Do you have a favourite genre (both as a reader and as a writer)?

As a reader, any novel that makes my heart beat faster and fires up the imagination, from sci-fiction to adventure or mystery.

As an author, I’m less worried about the genre than about being able to awaken the same emotions I look for as a reader. I imagine that is part of the trick to “hook” the readers: put yourself in their place and do not write ‘the end’ in a novel until, when you read with the eyes of an anonymous reader, you enjoy it as much as if you were a pig in a pigsty.

What made you get your work translated? And what process did you follow to find a translator?

The big world market of literature is dominated by books in English. According to the figures we are 500 million of people who speak Spanish, but what nobody says is that not many read. Very few people in Spain and even fewer in Latin America, so I think that translating one’s books is the best way to make a living out of writing, on the long term.

My current translator is a friendly woman from the States who lives in Cantabria (Spain) whom I met through the friend, of a friend, of a friend. She has translated two of my books to English (The Last Crypt and Black City, which is still being edited and I hope will be on sale before the end of the year) and the truth is that we have become very good friends.

Tell us something about your book:

The Last Crypt is an adventure novel that has sold over 200000 copies in the world in Spanish, Russian and Italian, as well as being the bestselling book (to date) in Amazon Spain, ahead even of such mega-bestsellers as Fifty Shades of Grey. That made me chose it as the one to get translated to English first, hoping that English readers will also enjoy it.

Any advice to your writer colleagues:

To never give up and to persevere if they want to become professional writers. Tenacity does not guarantee success, but without tenacity it is impossible to achieve it.

And his novel The Last Crypt:

«I could not stop reading it!.»
«I understand why this novel has been so successful.»
«An impressive and surprising ending, which gives you goosebumps.»
«You can´t stop reading. It’s great, spectacular & lots of fun.»
«It is one of the best novels I’ve read in a while.»
«The truth is that I did not imagine this book could make me enjoy as much as it has.»
«A stunning setting, believable characters, a great story and an unexpected ending.»
«Amazing!!!»

Diver Ulysses Vidal finds a fourteenth-century bronze bell of Templar origin buried under a reef off the Honduras coast. It turns out it’s been lying there for more than one century, prior to Christopher Columbus’s discovery of America. Driven by curiosity and a sense of adventure, he begins the search for the legendary treasure of the Order of The Temple. Together with a medieval history professor and a daring Mexican archeologist they travel through Spain, the Mali desert, the Caribbean Sea and the Mexican jungle. They face innumerable riddles and dangers, but in the end this search will uncover a much more important mystery. A secret, kept hidden for centuries, which could transform the history of humankind, and the way we understand the universe.
The Last Crypt in Amazon:  http://www.relinks.me/1500749303

Thanks so much to Fernando for the interview and for bringing us his book, thanks to all of you for reading, and if you’ve enjoyed it, like, share, comment and CLICK! And I’ll make sure I keep you informed when his next book, Black City become available in English too!