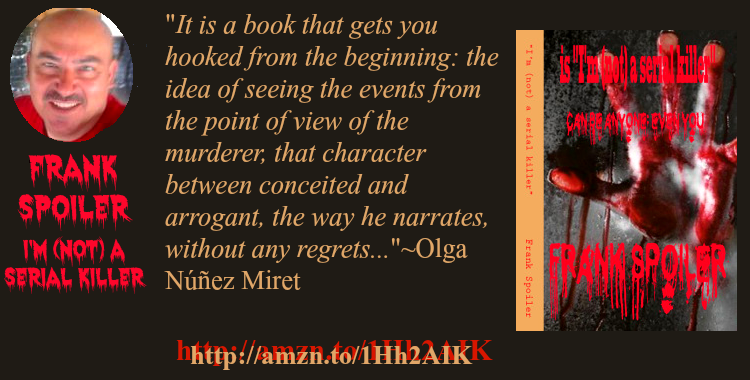 As you know, recently I’ve been bringing you interviews with some writers who publish mainly in Spanish, but who’ve had some of their books translated to English (and in some cases many other languages) as a way of sharing their journey and their experiences with you. Today I’m very pleased to bring one of the first Spanish authors I came into contact with a few years back. Frank is generous to a fault, always happy to help others, and as you’ll see, modest and very honest about his career and his creative process.

How and when did you start writing?

I started writing when I was eleven or twelve, mainly poetry, because I saw my brother write. After writing his poems, he would read them to me, and that made me want to try to imitate him and follow his example. I also started reading the classics, like Gustavo Adolfo Bécquer, Antonio Machado, Juan Ramón Jiménez, among poets, and also fiction writers like Gabriel García Márquez, Jules Verne or John Le Carré (to give some examples).

Could you describe your experience as an independent writer?

It is both a very gratifying and also a very difficult experience. In my case it’s necessary to understand that my difficulty is multiplied by two or perhaps three, as I don’t have much formal education, and the little I’ve learned has been through hard work and spending many hours in front of a computer screen, making mistakes and learning precisely from those mistakes. It’s true though, that the results are excellent. I’m improving and learning a lot.

What’s the moment that you remember more fondly from your experience (up to now) as a writer?

The moment I saw my first book of poems (“Poemas para componer una vida” [Poems to Compose a Life] was its title) published in Amazon and when a few days later I had it in my hands. That fabulous sensation of finally truly believing in yourself as a writer because you have self-published your first book, it’s something you never forget.

What made you decide to have your work translated? And how did you go about finding a translator?

It was a writer friend of mine, Roberto López Herrero, who sent me a message letting me know that through the platform Babelcube.com he had found a translator for his book. He convinced me and I took his advice, I uploaded (following the instructions) some chapters of my novel “Soy un asesino… sin serie”, I added the data they required, the chosen language for the translation and voilà, six months later I got an offer from Rafael (the translator).

Tell us something about your book

Mi novel is the result of my experience as a carer for an elderly lady suffering from Alzheimer, my mother. I looked after her for three years… It was very hard, her heart-wrenching screams and her crying had me disturbed and anguished, although the doctors insisted it was normal, that patients suffering from Alzheimer sometimes might shout and cry, whilst others might laugh or sing. The fact was that I never got over it… (at night I have nightmares and I feel guilty still, thinking that I should have done more to improve her quality of life those last few years, but that’s another story). The desperation (or frustration) was what made me fantasize about an atypical murderer, a killer…that despite killing many cannot be classed as ‘serial’ because he’s such a ‘weirdo’

Andy advice for you fellow writers?

Oh no, no, never. Each person should try and live according to his or her own experience and learn for the successes and mistakes in his own personal way.

A twisted tale of murderous imagination.

Gabriel is a killer, but not the kind you’re familiar with. His story is one of unfathomable cruelty and senseless logic.

The story behind the book, as you’ve read, is fascinating, and Frank shared the book (the Spanish version) in Wattpad, with great success. Gabriel is a great character and the story has a very interesting twist. The book has just been published, so there are no reviews in English yet, but I thought I’d translate one of the five star reviews for you, to give you some idea.

‘I had the pleasure of reading it as it was being created. It is a book that gets you hooked from the beginning: the idea of seeing the events from the point of view of the murderer, that character between conceited and arrogant, the way he narrates, without any regrets, his activities, to the point of causing you revulsion at some points, and the twist at the end, suggesting that the murderer rather than being in control might have been just responding to events that go beyond his imagining…everything makes this a novel that you can’t stop reading once you’ve started, and you’ll read in one go until the end.’

15 thoughts on “#Interviews-in-Translation today @FrankSpoiler and his not so serial murdered.”