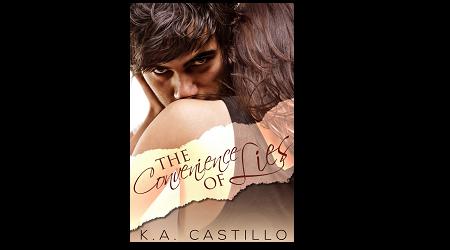 I’ve known K.A. Castillo for a little while now. I received her book, and I gave my honest review of it. In fact her’s was one of my very first reviews eve. K.A. Castillo brings realism without caving to the tricks some authors use and gimmick plots. The voice of her main character is real and carries through the book. For those not accustomed to authentic writing, her book would be an interesting read. For those who like the common, everyday gimmicks, get ready to be challenged. Now it’s time to . . .

“It doesn’t matter if it’s right or wrong. All that matters is if you can. If you can do something, what difference does it make?”

Based on a true story, The Convenience of Lies is a novel that keeps readers up past midnight with its story of friendship, mystery, crime, sex, and betrayal. Set in a suburban town, this story is told through the eyes of a high school junior, Mackenzie, who describes her crush on a “bad boy,” Ramon and her relationship with her best friend, Kira. During the course of the story, Mackenzie does her best to attract the affections of Ramon while her friendship with Kira evolves. Eventually, the different characters’ property starts getting vandalized and a mystery develops as Mackenzie and Kira try to get to the bottom of who is behind the vandalism.

RW: When did you interest in writing begin?

K.A. CASTILLO: I was raised by an English teacher, and so my writing skills have been coached and nourished for as long as I can remember. I have loved writing ever since I learned how to string sentences together, and I’ve kept a diary since kindergarten.

RW: Is The Convenience of Lies your first published piece?

K.A. CASTILLO: The first time my name was published was a letter to the editor for Smithsonian’s October 2011 edition of Muse Magazine. My letter inspired the editors to create a “special edition” Muse Mail page focusing on letters from older readers. In 2006 I was awarded three scholarships valued at over $25,000. For each of these scholarships, the personal statement I wrote was an integral part of my application. Throughout college I studied the process of storytelling, and in 2008 I graduated with honors from California State University Northridge.

RW: Okay, I am very jealous about the Smithsonian thing. That is so amazing. Now, what inspired the story of The Convenience of Lies?

K.A. CASTILLO: The first novel I ever read was Little House in the Big Woods by Laura Ingalls Wilder, and it inspired me to someday write a book based on my own life. And so, I started keeping a diary with the hopes that someday I would stumble upon a story worth telling. Then, one summer while I was in high school I experienced a lot of drama which I thought could make a good story.

RW: What message do you think your book delivers to the reader?

K.A. CASTILLO: Anyone can fall into an abusive relationship. It is easy to fall prey to what social psychology calls “blaming the victim” and thinking it will never happen to you. However, remember that love is blind, and look out for yourself first.

RW: Describe  The Convenience of Lies in one word.
K.A. CASTILLO: Innocence.

RW: I read some exciting news on your author blog recently about your book and its future, would you share a bit of that with our readers?

K.A. CASTILLO: I started out as a self-published author but was recently approached by Creativia and have now signed a publishing contract with them. You can read all the details on my author site here.

And do go and read it. You can feel the excitement in the story. I am still geeking a little over it.-RW

5 out of 5 Stars-This book was hard to put down and full of useful validating information. As an MFT I have suggested this book to many teenagers and young adults whom have struggled with similar issues, opening up the door for change. The writer gave a sincere portrayal of her struggles , such a difficult feat…..well done to Ms. Castillo I truly appreciate the risk you took in sharing your story.-Brenda Hopley, Amazon Review

People can currently get The Convenience of Lies at Amazon in both paperback and Kindle formats. And of course you must follow Kimberly everywhere, just as I do at:

And now for some quirky questions.

RW: What is your favorite thing to drink?

K.A. CASTILLO: It’s hard to pick just one! But I love strawberry limeade.

RW: Strawberry anything is amazing. Through our talks before I know you are in graduate school, but I have to ask, what’s in your stack of books to read right now?

K.A. CASTILLO: I have plenty of textbooks to get through.

RW: Who is your favorite author?

RW: This is a silly question considering who your favorite author is, but I have been surprised before, if you could have written any book that exists, other than your own who’s would it be and why?

RW: In the tradition of Inside the Actors Studio, What is your favorite word and why?

K.A. CASTILLO: Strength. I love what it portrays, and it’s important to always remember to stay strong. At the same time, from a lingual standpoint “strength” is an interesting word because it’s the longest one-syllable word in the English language.

First of all, I want to thank K.A. Castillo for the interview. Some day I might ask her which Harry Potter book is her favorite, but I decided not to put her on the spot this time. Just as I wouldn’t ask someone which is their favorite child or year of Mustang. K.A. Castillo’s book The Convenience of Lies may be in the category of Young Adult book but it is for readers older as well. For some it will help them recognize what may be happening in their lives, for others it might even show them what they are doing to others. K.A. Castillo’s book is a classic example of how a book can mean different things to different ages. Just as various ages read Harry Potter and get something from it, so too can people read The Convenience of Lies and take away a new understanding. Read my LWI review of her book here. Now go buy her book in paperback or for Kindle.

5 thoughts on ““It doesn’t matter if it’s right or wrong.” The Convenience of Lies @K_A_Castillo Q&A!”