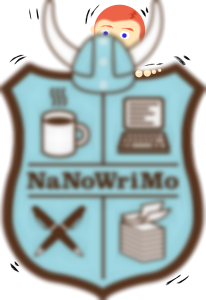 I’ll let you in on a secret though; This isn’t supposed to be submission quality work. AT ALL!

You write and write and get your basic story and plot down with encouragement and a goal. You have messages from the community and great guest posts from published authors, even superstars in the publishing world, who give you tips about what to do. I want to say last year that Jim Butcher was one of the authors who joined in.

A SECOND REASON IS:

With NaNoWriMo you can have “Buddies” who will encourage you and you can turn to. You can see their progress which in turn encourages you and yours.

I did NaNoWriMo for the first time last year and P.S. Bartlett was my only buddy. But having that buddy was encouraging. We would email our progress, see each others progress in word count on the NaNoWriMo  site, and generally have that person doing the same thing we were doing. That person going through what we were going through.

Want to find me? Well, not too many people named Ronovan and my Author picture is the one I use there. I’ll be committing to NaNoWriMo in a big way this year. I will be attempting to get more involved in the community and whatever community we build here on LWI under the NaNoWriMo Support page and NaNoWriMo Support Articles.

And if you have a competitive type Buddy and you are competitive, then it’s game on!

It forces me to put thoughts into words and I don’t have to worry about quality at that point. All I have to

do is keep writing and flowing.

This year I am going to work on a book I’ve been promising my son I’ll do for a long time. Yes, I’ve had hugely legitimate reasons for not having done it yet, but now I’m going to do it. It’ll be something that will have his name attached to it because I sat with him one day while his Grandma was in an appointment we had taken her to and I had slowly nudged him through creating an idea. Now I’m combining his idea and my thoughts.

There is no failure in NaNoWriMo. So you don’t reach  50,000 words. Maybe you reach 40,000, but you wrote and you wrote. There is no judgement. Everyone is in the same boat and doing the same thing. Everyone gets it.

A FINAL REASON IS:

This is a world wide event. Sometimes regions compete against each other for fun, even cities. Last year my city competed against another one that is a rival to our college football team. I do believe we won. Not that we won anything personally, but it was an added thing of fun to the whole experience.

There really isn’t a reason not to try NaNoWriMo. It is a beginning for some, a yearly start for a novel for a lot of Indie Authors for their next published work, and a fun experience for those who love to write.

About the Author and a Winner of NaNoWriMo 2014!

Ronovan Hester is an author, whose debut novel Amber Wake: Gabriel Falling is due to release in December of 2015. He’s also a blogger and former educator who shares his life as an amnesiac and Chronic Pain sufferer though his blog RonovanWrites.WordPress.com. His love of poetry, authors and community through his online world has lead to a growing Weekly Haiku Challenge and the creation of  LitWorldInterviews.WordPress.com, a site dedicated to book reviews, interviews and author resources.  For those serious about book reviewing and interested in reviewing for the LWI site, email Ronovan at ronovanwrites (at) gmail (dot) com to begin a dialogue. It may not work out but then again it might.