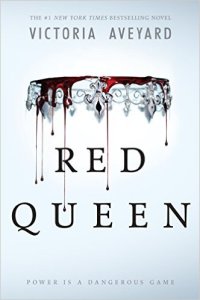 These snippets summarize Red Queen by Victoria Aveyard, Book One in the Red Queen series.

SUMMARY from back: Graceling meetsThe Selection in debut novelist Victoria Aveyard’s sweeping tale of seventeen-year-old Mare, a common girl whose once-latent magical power draws her into the dangerous intrigue of the king’s palace. Will her power save her or condemn her?

Mare Barrow’s world is divided by blood—those with common, Red blood serve the Silver- blooded elite, who are gifted with superhuman abilities. Mare is a Red, scraping by as a thief in a poor, rural village, until a twist of fate throws her in front of the Silver court. Before the king, princes, and all the nobles, she discovers she has an ability of her own.

To cover up this impossibility, the king forces her to play the role of a lost Silver princess and betroths her to one of his own sons. As Mare is drawn further into the Silver world, she risks everything and uses her new position to help the Scarlet Guard—a growing Red rebellion—even as her heart tugs her in an impossible direction. One wrong move can lead to her death, but in the dangerous game she plays, the only certainty is betrayal.

WHAT I THOUGHT: I have to begin by mentioning the imaginative world invented by Aveyard. She takes us from the Stilts, slums where red blood folks live in abject poverty, to a castle made with unbreakable, diamondglass walls that is the captial of Silver life. The contract couldn’t be clearer. While Reds have seen the amazing powers demonstrated by a few Silvers, what Reds don’t know is that Silvers with powers they could never fathom exist–fireburners, telkies, folks who can become invisible, beings who take the form of shadows and can bend light, Oblivions who can explode things with a touch, Storms who control the weather, others who can bend metal to their will, and more. The variety of powers adds an interesting dynamic to the world and I’ll be very curious to see how Aveyard develops this in the next book in the series.

I thought the author brought forth the three main characters with a lot of depth. The central protaginist, Mare Barrow, demonstrated herself to be a strong heroine. It’s clear she will do whatever it takes, including sacrifice her own life, to upset the uneasy imbalance of power between Red and Silver. She has a conflict before her that is significant and had me cheering her success! And then there’s the two princes, Cal and Maven who have different mothers, setting up conflict, not only with the pecking order, but inner conflict as well. Cal, while the eldest, is the dutiful son, groomed for the monarchy who also holds a role as general, commanding the armies of the nation. Maven, the younger, is his mother, the queen’s, favorite and must navigate this family dynamic…and boy does he. I won’t give away any spoilers, but let’s just say this produces a huge plot twist that you won’t want to miss.

Having said all that, it was clear from the get go that this is the first book in a multi-book series (at least three). For all the positives, I found the first half of the book dragged for me with so much background on Mare. While I suppose it’s important to understand her life history, I felt as though the narrative could have begun at a different place and much of this material could have been woven throughout the storyline in a different, more engaging manner. The next installment in the series, Glass Sword, is coming Feb 9, 2016 and is available for preorder on Amazon

Get Red Queen (on Amazon)

IF YOU ENJOYED THIS POST, be sure to leave a comment to let me know what you thought.

FREE EBOOKS: I also invite you to download the free ebooks of the award winning Prequel and Book one in the Andy Smithson coming-of-age epic fantasy series.