He’s been referred to as the new Dan on the block of historical fiction conspiracy theories. I don’t agree. Dan McNeil handles his subject with a better hand than Brown ever has. Yeah, sure, you want to knock him across the room at times but who doesn’t want to read something that gets them on an emotional level at times? If you want a fluff read, skip this review. McNeil isn’t about fluff.

Dan McNeil? You know, I normally have a few ideas to start off with for a review. The problem today is—McNeil throws numerous things into The Judas Apocalypse that are intriguing and varied. And they 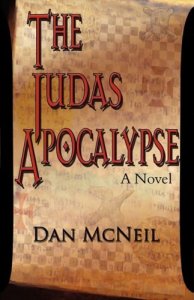 appeal to me on a DNA level. That meaning he has inclusions which spark my interests.

McNeil gives us a story that spans two thousand years, not year by year or hanging out in that distant past for so long you want to skip pages, and that story threatens to devastate a world, a way of life, and rewrite history. And he does so by piecing together historical facts with bits of legends and myths that are most familiar and some not so to the average layman. He brings some new twists to the saying “everything old is new again”.

I’ll tell you this, I know the legends, the history, and the names of the real people mentioned in The Judas Apocalypse. And McNeil gets them right AND he brings some to life in a most interesting way. Why do I know these things? I was a world history expert and teacher with special courses in Nazi and European History under my belt. I taught delinquents to the point they blew the national average in World History testing away.

History is still a major love of my life. This is why one day, not so long ago, I chose to pick up this book and begin reading for pleasure, yes, a Book Reviewer was going to read for pleasure with no intent on reviewing. But my motto is “Read a Book, Write a Review”.

Then I got either interested or ticked off because McNeil was writing about the same characters I used in a YA book I had written a few years ago. (It’s still in one of the draft stages on my computer.)

Dr. Gerhard Denninger, a Jewish Archaeologist in Nazi Germany is spending his years in of all places the Ahnenerbe, the Heritage Bureau of the Third Reich, headed by Heinrich Himmler himself. This is the department that searches for religious relics in the hopes their power will bring victory to the Third Reich.

He comes in contact with a fellow member of the Bureau, one Otto Rahn and off we go on the adventure of a life time. Denninger’s love of the legend of the Cathars and their missing treasure has consumed his life and now he finds himself doing whatever it takes to find it. This includes lying, cheating, and risking death at the hands of the Nazi regime as he makes his way closer and closer to his dream come true. At times his encounters are humorous, deadly, and explosive.

But what happens when he stumbles across four US Army soldiers, who make modern day Reality Shows look like the cast of My Three Sons, wandering France in search of their unit? It gets even stranger and more nerve racking.

McNeil unites four soldiers that represent a broad range of US culture and forces them to be a close knit unit to survive.

Honestly, the answers may not be as clear as you think, not even to Dr. Denninger who gets a ringside seat to the soap opera that occurs as they all continue on the hunt for the Cathar Treasure.

This is one well researched piece of fiction and you don’t feel like you’re reading a research article like you do in some novels who get lost and forget they are writing a story to entertain. There  are times when you completely lose yourself in Dan McNeil’s world. You see and hear things. You feel remorse at times, even surprisingly for characters you can’t stand. McNeil makes you have emotions and thoughts, or perhaps maybe I should say he has you examine things about yourself at times that may make you wonder.

Dan McNeil makes mention at the beginning about the religious content of The Judas Apocalypse.  For those on either side of the hill about their faith, this book need not worry you. Read as it was intended, a good, fun time to let your imagination flow from a man who obviously has some obsession with history and loves to piece together the pieces from different puzzles to make a new picture. I personally was able to read it with no problems and knew enough and felt enough about what I believe to enjoy the story.

Personally, I believe a book that gives one pause at times is a good book. I like to have a think as a result of something I have read rather than have my time and thoughts filled with something I won’t get anything out of. Dan McNeil’s The Judas Apocalypse is a book that will make you think. And at times some of you will shout at him. Don’t worry, he won’t hear you, and if he did, he would laugh and applaud, for that’s what he was hoping for, I’m sure.

Dan Brown? Indiana Jones? Neither. This is a unique story with characters not fitting nicely into anyone else’s pigeon hole. Similarities of feel? Maybe, just so you have that frame of reference where this might genre might fall, and find yourself comfortable in, but the story is its own story.

I recommend this book for lovers of history, WWII fiction, and some of those archaeological adventure stories.

GET THE JUDAS APOCALYPSE

Visit http://www.danmcneil.ca/ for other outlets.

Dan McNeil is a born, raised and currently residing Canadian and proud to say so. After a song-writing partnership brought some fame and continued own into a music career, Dan spent many years behind the scenes of television as a camera operator learning the art of storytelling, whether it be good or bad. He became senior editor of the station and often composed the music for many of the local productions. Then it happened.

His first book, “The Judas Apocalypse” was published in 2008. He fully enjoyed the experience and decided to write another. His latest offering is “Can’t Buy Me Love,” a light hearted romp about a heist during the Beatle’s first visit to the United States in 1964, to be released in the summer of 2012. He currently is fending off his friends and fans constant clamoring for more. As if there isn’t more in the works.