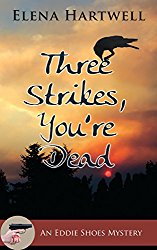 Three Strikes, You’re Dead by Elena Hartwell is the third book in the Eddie Shoes Mystery series. Each book is stand alone. First, the story was good with an ending you probably won’t see coming unless you really pick up on the clues.

Secondly, I had a challenging time getting past the first couple or three chapters, the reason being this isn’t my usual type of book. The Eddie (Edwina) Shoes series is on the border of Cozy Mystery and Mystery. I normally read things with lots of danger and political or secret spy type intrigue, but I received this book free for an honest review. Thus, I pushed on. And I’m happy I did.

Eddie is a private investigator that is accustomed to being on her own and doing her own thing, until recent events brought her parents into her life. Chava, her mother, is a character all her own, a bit crazy at times, but a nice touch of comedy when needed. Then there is Eduardo, the mob connected father that is very protective of his daughter and always seems to be in the right place at the right time. He’s my favorite character in the book.

The story begins as Chava is driving herself, Eddie, and Eddie’s dog Polar to the Cascade mountains for a short vacation at a spa. A free trip Eddie can’t pass up. But with Eddie it doesn’t take long for trouble to find her. I guess this time she finds it. She goes for a short hike her first day and ends up making a promise to a dying man in the forest that she will find his missing daughter. Then she’s running for her life from a forest fire.

And so, begins the mystery. Who was the man? Where is his daughter? With only a silver crucifix and photo of the daughter shoved in her hand by the dying man to go on how will Eddie solve the case? With the help of her parents, of course.

Don’t get tricked into thinking you know how the story ends by the obvious, that’s why I say this is a border line Cozy Mystery and Mystery book. It’s a comfortable read and a nice growth for characters in a series like this but it adds a bit more challenge than the usual fare.

With this third book it seems you get a better sense of what made up Eddie’s DNA, her ingrained character. She has as touch of the light of her mother with the seriousness of the father, even though only Chava was present in her life as a 16-year-old mother who didn’t know how to raise a daughter.

I give Three Strikes, You’re Dead 4 STARS because of what I saw as a slow intro. I didn’t take away from the rating based on this not being my normal reading genre, I read it for the genre it is. I’ve read all the Cat Who series by Lilian Jackson Braun. That’s the only Cozy I’ve ever been into. but I still get how the genre reads.

Remember to click HERE to visit Amazon and get the book.

And why is Elena such a great writer? Because she received her Ph.D. from the University of Georgia, my Alma Mater, so she was destined to be great.

Visit ElenaHartwell.com to discover more about her, her other books, and all THOSE ANIMALS!