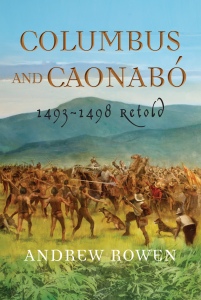 DESCRIPTION of Columbus and Caonabó: 1493-1498 Retold by Andrew Rowen.

“Columbus and Caonabó: 1493–1498 Retold” dramatizes Columbus’s invasion of Española and the bitter resistance mounted by its Taíno peoples during the period and aftermath of Columbus’s second voyage. Based closely on primary sources, the story is told from both Taíno and European perspectives, including through the eyes of Caonabó—the conflict’s principal Taíno chieftain and leader—and Columbus.”

When you read a Historical Fiction novel you have a certain thought in mind of what to expect. Andrew Rowen gives you more than that, much more. The press release discusses the research he’s done through the years but many do the same. But I haven’t run across anyone who puts the detail of the people into their work as much as Rowen has. Given as much life to a people we know so little about but by the end know so much and gain a fuller 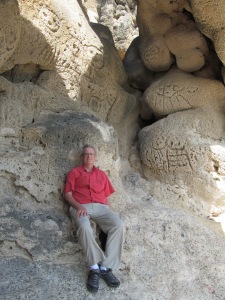 picture of a part of the American foundational background. I’ve taken U.S., European, and Latin American studies at the University level and not been given any of the detail given here, nor even heard of the vast majority of the people given in this work.

Being a history person I of course loved the specifics pertaining to the events of the past but even more I enjoyed Rowen’s interpretation of the people involved, especially the Taíno peoples. Also the conflict between the crew of Columbus left behind and moving forward. There was no simple black and white, right and wrong to the story. I suppose overall you would say there is one, but as far as the actions of both peoples the ideas made a lot more sense than what we learn in school.

Rowen shows the use of the Europeans and Taíno forming alliances whether they be real or merely for appearances, the use of Christianity as a subjugation strategy as well as a tool by the Taíno. The Taíno religion is also a major issue in the progress of negotiations and relations. (I don’t want to say too much here.) The actions of Columbus are laid bare, warts and all. Even coming to be questioned by Isabella and Ferdinand. The presence of Spanish settlers in the islands is devastating in more ways than the disease we’ve so often read about.

Ultimately you feel what is happening as it happens. The anguish of the Taíno peoples, the settlers, and even the soldiers who didn’t sign up for what happens. This along with 42 historic and newly drawn maps and illustrations bring life to a part of history glossed over by the victors.

I’m not an anti-Columbus or anti-Western Exploration person. I like history. I am a historian. I want as many of the facts as possible. Unfortunately those who are the victors tend to suppress the ugly parts they played to achieve their victory. “Columbus and Caonabó: 1493–1498 Retold” provides more facts while being entertaining at the same time.

A solid 4 out of 5 Stars. A 4 because of all the great information and the life given to the historical figures. Also a 4 and not a 5 because it is a bit of a heavy read. This is not a read in one or two sittings. You will likely want to do so but take  your time so you can absorb everything you’re being given.

I would read the previous book, Encounters Unforeseen: 1492 Retold, of which this book is the sequel.

504 pages with the reading portion ending with Agonies and Fates on page 417. The remaining pages are filled with great information for further understanding, including a Glossary. 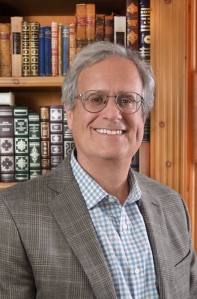 Andrew Rowen has devoted 10 years to researching the history leading to the first encounters between Europeans and the Caribbean’s Taíno peoples, including visiting sites where Columbus and Taíno chieftains lived, met, and fought. His first novel, “Encounters Unforeseen: 1492 Retold” (released 2017), portrays the life stories of the chieftains and Columbus from youth through their encounters in 1492. Its sequel, “Columbus and Caonabó: 1493–1498 Retold” (to be released November 9, 2021), depicts the same protagonists’ bitter conflict during the period of Columbus’s second voyage. Andrew is a graduate of U.C. Berkeley and Harvard Law School and has long been interested in the roots of religious intolerance.

© 2021- Ronovan Hester Copyright reserved. The author asserts his moral and legal rights over this work.