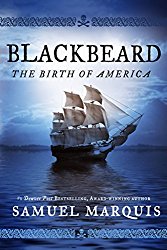 Get Blackbeard: The Birth of America by best selling author Samuel Marquis at Amazon by clicking here.

You ever watch a historical movie and wonder about those conversations between historical figures? We’ve heard of the events but there really isn’t much about what people say to each other, but without those creative licenses the screenwriters take it would be a lot like being back in high school history class. Blackbeard: The Birth of America by Samuel Marquis is one of those historical adventures that teaches us by linking events with realistic dialogue and everyday events in between.

Ever since Blackbeard became a “pirate” there have been stories about him and most of them quite gruesome but in Marquis’ latest novel we get the truth. Being the direct descendent of a pirate, Marquis has the interest in the history and research savvy to get to the core of the real story.

I’ve done my own research into Blackbeard, having used him as a minor character in a pirate novel myself and Marquis goes way beyond anything I ever ventured into. Each chapter tells you when and where events are taking place all the way up to the murder of Edward Thache, or Blackbeard as we know him. Thache was an American hero in comparison to the men who went after his head at the end. Thache cared about America and the future of the Western Hemisphere while his adversary only cared about himself and England.

Engrossing, eye opening, and engaging, Blackbeard: The Birth of America is a must for adventure lovers, history lovers, and um lovers of tall dark haired men?

5 STARS, but from the award winning author Samuel Marquis what else do you expect?

Visit SamuelMarquisBooks.com for book availability through other vendors. And MAKE SURE to read the very ENTERTAINING About Samuel page. Here I thought I knew everything but “The Spider”? Who knew?

3 thoughts on “#BookReview of Blackbeard: The Birth of America by @Sammarquisbooks”