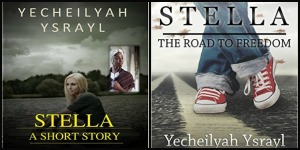 I must apologize for the order of the reviews. I read Book Two, Stella – Beyond the Colored Line, first. You can find that review here.

This is a review of book one and book three. 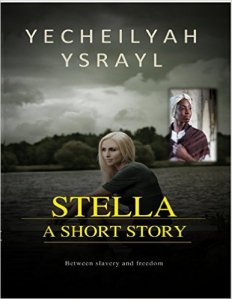 When Grandma Stella shares an old journal with Cynthia, her granddaughter, and her boyfriend Alex, the family’s history is laid bare. Grandma Stella explains that she was named after her Great-grandmother, Stella Mae, whose real first name was Hadassahyah, which in Hebrew means ‘myrtle tree.’  Many of the old names were taken from the Slave Ships.

The year is 1864 in Louisiana and the story slips back in time introducing Grandma Stella’s Great grandmother, Stella Mae, age nineteen years. Stella Mae begins her story with a memory of how as a child she was forced to use the facilities designated for “niggras only.” Young Stella Mae tries to reason out why her Mama can’t walk into the front door of the general store and why they can’t use the restroom everyone else uses. Even at a young age, Stella Mae could sense the inequality in her existence.

Stella Mae’s journey is that of trying to find her place in a world where she is only considered to be a piece of property. When her childhood friend, Miss Carla, the daughter of Marse Saddler, and her husband coerce her into following them to their new home; Stella Mae does so trusting that Miss Carla will be her friend just as when they were children. Carla dupes the naïve Stella who now becomes a slave to them. Freedom is just a fleeting image in Stella Mae’s mind. Traded like a farm animal, Stella learns that she is indeed a slave, not a free woman in any way.

This story retells the history of many African American families alive today. It is a heritage rich with strife and suffering but also filled with a hope and a desire to finally grasp the freedom that has been so elusive and out of reach for so many. At times, I was forced to accept some uncomfortable truths about our American past. There is nothing wrong with that. This story makes you think about freedom and what it really means to you as a person, and as an American.

I loved this story because it is through the learning of other’s journeys that we begin to learn much about ourselves. Their pain becomes our pain and we begin to see through their eyes. Stella Mae will touch your soul with such a sweet simplicity you won’t even know it. 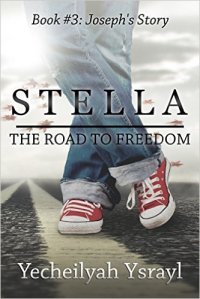 The final book in the series is Joseph’s story, where Stella’s grandson reconciles the feelings he has about his heritage. It is the story of a young man moved by the eloquent words of Dr. Martin Luther King, Jr. who yearns to be part of the white middle class and part of the movement to revolutionize the world all at the same time. A man, both white and black, hoping to evoke change in the world of 1960’s America.

The Jim Crow laws had come to an end in 1954 when the segregation of public (state-sponsored) schools was declared unconstitutional by the Supreme Court of the United States in Brown v. Board of Education. However, the lasting effects of these laws were felt all over the United States, not just in the southern states.

Joseph along with a group of his friends, both black and white, embark on a journey of self-discovery. Naïve but believing that they could make a difference, the young people set out to become part of the SNCC (Student Non-Violent Coordinating Committee) conference in Georgia. This book chronicles the trials and tribulations of their journey.

My favorite quote from the book is when Joseph recounts: “In the beginning it was not about Civil Rights, it was about freedom and freedom is what it has all been about.”

In 1960’s America, African Americans did not even have the ability to vote because of strict registration laws. Many African Americans lived in poverty and were born in their homes. There were few hospital births. The end result was a lack of birth certificates, the very documentation needed to prove American citizenship. Of the African Americans that did register to vote many lost their jobs, their homes, and their lives. This was happening when I was a young girl. It is not fiction.

What did I learn from Joseph’s story AND the entire Stella series? Flash forward into the future to the headlines that exist today. Unfortunately, racism still exists in our society. My hope is that the more we read and understand the plight of all Americans we will learn what freedom really means. We can all learn to be free by knowing who we are as a people. I was humbled by Joseph’s story. This was another emotional read for me, as are all of Yecheilyah’s books.

If you like provocative reads that make you think about life and your own values you will enjoy Joseph’s Story – The Road to Freedom. In fact, I suggest reading the entire series. It is well worth the visit back into the past.

Born in 1987 on the south side of Chicago, Yecheilyah Ysrayl (“EC”) is an author and Spoken Word Artist.

As an artist, Yecheilyah Ysrayl is an incorporation of spiritual critique, honesty and an authentic analysis of African American identity. She seeks to create work that promotes healthy research and investigation into the cultural identity, laws, customs and traditions of the African American for self-revolution and advancement. Furthermore, “EC” seeks to advance the promotion of truth and identity by way of Spoken Word.

“EC” currently lives in Shreveport, LA with her husband where she writes full time.

To watch a trailer for the book click the link below.

Colleen M. Chesebro grew up in a large city in the Midwest. Keen on making her own way in the world, she joined the United States Air Force after graduation to tour the world and find herself. To this day, that search continues. Today, she’s a Michigan Poet who loves crafting syllabic poetry, flash fiction, and creative fiction and nonfiction. Colleen sponsors a weekly poetry challenge, called #TankaTuesday, on wordcraftpoetry.com, where poets learn how to create traditional and modern forms of syllabic poetry. Colleen created Word Craft Poetry as an uplifting community where poets can learn the basics of writing Japanese and American syllabic poetry by sharing their own poetic inspiration on their blogs through the challenge written in one of the following forms: haiku, senryu, haiga, tanka, gogyohka, haibun, tanka prose, renga, solo renga, cinquain, and its variations, Etheree, nonet, shadorma, Badger Hexastich, and Abhanga. Poets receive positive feedback from their peers who inspire each other to stretch their creativity. Colleen’s syllabic poetry has appeared in “Hedgerow, a Journal of Small Poems,” and in “Poetry Treasures,” and “Poetry Treasures 2: Relationships,” including several other online publications. She’s also received several awards for her flash fiction pieces from the yearly Carrot Ranch.com rodeo events. Colleen created Unicorn Cats Publishing Services to assist poets and authors in their book publishing needs. When she's not writing poetry or crafting short stories, you’ll find her digging in her garden, or playing with her two unicorn cats, Chloe & Sophie. Most days you can find her writing poetry on wordcraftpoetry.com. 💜 View all posts by Colleen Chesebro: WordCraftPoetry

9 thoughts on “#BOOK REVIEW BY @COLLEENCHESEBRO OF “Stella – A Short Story,” and Joseph’s Story – The Road to Freedom,” BY AUTHOR @AHOUSEOFPOETRY”