I picked this book off the shelf because its cover caught my eye- the labels written on the author’s face and the title jumped at me, speaking to me of something that I feel very strongly about. What is being a woman in this world about? 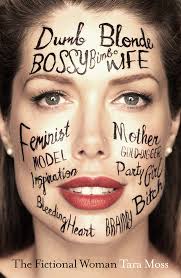 Tara Moss has worn many labels in her time.

Now, in her first work of non-fiction, she blends memoir and social analysis to examine the common fictions about women…

The question is – why do I want to read a biography of Tara Moss? I knew of her as a fiction writer and some vague reference of her being an ex-model. Curiosity. I was curious about the world of modelling and how a model became an author. I had my reservation about Moss writing an interesting and convincing feminist text (at first glance from the cover) not because of her ability but merely a change in writing genre. Well, I took a chance and I am glad.

The book does not disappoint. Readers will get a perspective of Moss’ life – early life in Canada to her modelling days in Europe then later life in Australia. She presents the narrative of her life in a well-balanced manner – enough emotions to allow readers to see her humanness, passion for her beliefs and convictions, strength to protect herself and hers.

Most interesting is the weaving of Moss’ life experiences with social analysis, telling her life from the perspective of a woman – to show to the world how her experience is gendered. She is not only ‘woman’ say, when a mother or a female model, but all the time. She reminds her readers she is ‘woman’ in everything she does and because of this, her experiences are what her experiences are.

This book is definitely not a feminist text, if one defines ‘text’ as being academic and peppered with research and studies. Being a Ph.D candidate at the University of Sydney, Moss is certainly capable of writing a text. But this book is something better – story-telling by a woman of substance who presents her life from a feminist sociological perspective, supported by credible statistics and references. It is an erudite perspective on common labels forced upon women such as ‘gold diggers’, ‘mean girls’, ‘femme fatale’, and ‘crone’.

To clarify, Moss’ defines ‘feminism’ as

…the advocacy of women’s rights on the grounds of political, social, and economic equality to men.

And if you believe and expounds (or fight for) one or many of these equalities, whether on the world stage or at the dinner table, then you are a feminist.

Moss is even-handed in her approach. She raises anomalies, paradoxes, conundrums, and questions about gender inequality. She challenges the readers’ perceptions and acceptance of pervading normative philosophy. There are few judgments as Moss presents a matter-of-fact exposition about the state of gender disparity in our world.

Moss touches on many topics, which central theme is to debunk the myths and stereotypes of a ‘real woman’ and along the way, of ‘real men’ in our society.

She calls for greater female participation, direction and management in the arts and media.

More and more, women are participating in the storytelling that shapes our perceptions of the world. Perhaps in time, with a different balance of storytellers, we will be less reliant on the old sexual stereotypes…

According to Moss, gender stereotyping is not just about women, it is also about men. It prevents both women and men from realising their potential, from embracing aspects of themselves. Her narrative on the ‘beautiful man’ is inspiring – analogies to the Spanish flamenco dancer and matador – where both men and women imbued with sensuality are ‘permitted’ by society to express it. To quote Moss,

Why has our culture, specifically, rejected or forgotten ‘male beauty’? Why are men and boys commonly humiliated and ridiculed for grooming or dressing in a way that aims to be aesthetically beautiful…

As we associate emotion, caring and sensuality with the feminine, and we penalise men for identifying with these traits, we have in essence excised male vulnerability, caring, emotion and the ‘desire to be desired’ from the mainstream…

The beauty myths for men and women continue, it would seem.

Moss also questions the role we as a society allow the media and advertising to play as moral guides as well as the reflectors of societal expectations and norms.

How did advertising cease to be a thing that existed to try to turn us towards something, but actually became as real to us as the thing itself?

I have highlighted a few topics which Moss addresses in this book through the lens of her lived experience. There are many more topics which are highly entertaining and thought-provoking. Moss owns all that she says, the labels that have been applied to her, the labels which she now assumes, the reasons for her being.

And the ending to the book is heartfelt:

Now I have laid my own truths bare in the Fictional Woman, because today I can afford to tell my story, emotionally, but also financially, without worrying about where my next meal will come from, as I once did…

The next chapter is yours.

A challenge? A call to activism? Your call.

Who would I recommend this book to?

The Fictional Woman is a page-turner, written with passion and conviction, concise and succinct in its exploration of feminist issues which have touched Moss’ life.

This is a book for you who wish to see the world a little differently.

A human Being and Doing, on living a meaningful and purposeful life. View all posts by FlorenceT