I took part in the NaNoWriMo event in 2012, and completing that crazy, epic sprint to the end taught me more than I expected about the job of writing. First and foremost is the daily word quota. The more you fall behind, the less chance you have of catching up, and writing just under 1 700 words a day seems daunting. The thing is, that most of us write more words than that every day without thinking about it. We blog, we interview, we write bits of our works in process. It’s absolutely doable though.

The beauty of the NaNo is that you get to leave chunks out. You just pop over anything you’re not sure of and write on, because editing during NaNo is death. The urge to go back and at least read over what I’d written so far nearly took me out, but I knew that if I did I’d get to editing, and that would mean I’d never make it. NO editing. That month taught me that ongoing over-editing can cause more grammar problems than not editing your first draft at all. I only decided to join at the last minute, so I had absolutely no idea what I was going to write apart from the fact that I was going to write in a genre that I didn’t think I could. I had no idea from one minute to the next where the story would go, or if it would be absolute garbage in the end.

At the end of that November I had completed just over 50 000 words of a book I loved. I found that I loved writing in a genre I believed that I would be hopeless at, and had the beginning of a series that is now well on its way to book four being published in early 2015. To any of you thinking of having a first try at the NaNoWriMo this year, I say a hearty Go For It! You’ll learn to write every day to meet your personal goals. You’ll be way too busy to angst over all the writing things we usually angst over. You’ll feel the warm camaraderie of fellow scribblers from around the globe. And if you win – well then, you’ll have a novel to edit. A couple of tips I learned from my NaNo month….

• Tell your family what you’ll be doing, and ask for their support. Let them know that there probably won’t be any homemade pudding or cookies in November. Suggest that there might be days when you aren’t going to brush your hair, and expressions of repulsion aren’t conducive to a happy muse. Support will be key this month.

• Whatever you’re cooking now, cook more and freeze what you can. You’re going to be far too wrapped up in your story to chop and peel anything. I froze piles of fillings, and pancakes were so prevalent during my frantic scribbling month that they were banished for a long while afterwards.

• Don’t feel guilty – it’s only a month, and perhaps you’ll be better appreciated for all that you usually do after a month of eyeballs firmly on computer. Prepare for a month that’s all about you and your writing.

• I never did this, but it would have made my life a lot easier. Write an outline and a rough cast of characters now. Think of where your story will play out – think scenes and settings. Plan your ending so that you can work towards it as soon as you type your first word.

• Keep a notebook and jot down important scenes, names or anything you’ll need to remember later in the book, because you don’t want to be wasting time reading through what you’ve written to find anything during the process.

• Make a rough cover now to inspire you. You can change it later.

• Plan to have fun with it. When you hit that word target you’re going to feel on top of the world, and NaNo rewards their winners with quite a lot of writerly swag, deals, and a gorgeous badge to share your impressive accomplishment with the world.

• Go for it. You have all to gain and nothing to lose. 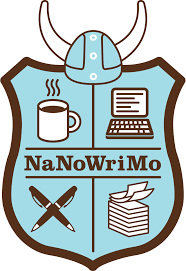