Skip to content
Today’s Spotlight Author is our very own Angela Kay! A new Indie Author as well as one of our busiest book reviewers here at LWI.

1. How did you come up with the idea for your novel the Murder of Manny Grimes?
I started writing it during my final semester of college. I was taking a writing course where we were to write the first thirty pages of a novel. I didn’t really have an inspiration strike…I just started writing and the plot seemed to unfold. My professor and students alike 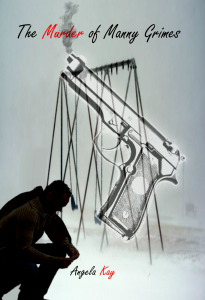 loved the beginning of the story. Because of my passion of writing, I continued the first draft with the hopes of getting it published one day.

2. For aspiring writers out there, tell us how long it took you from idea to publishing your novel? Tell us about the process of how it all came about.

It took me seven years to perfect it. I finished the first draft in a year. I was excited because it was the first full length novel I finished. For the most part, I’d only written short stories. After that, I began to edit my book, and it was a major headache. I must have changed the direction of the story three or four times. I took a lot of breaks from it…more than I should have. Finally, by the many rocks God tossed my way, I finished my final draft. And just as I finished, I came across an awesome editor who didn’t mind fixing a few kinks. I played around with the idea of submitting my completed novel to a bunch of agents, but the truth is, it’s a dog eat dog world out there. I didn’t have patience for a bunch of no’s. Even when I was ready to send it off, I was hard on myself about whether it’s good or not. After considering my options, I went the route of starting as an Indie author. My publisher is a long time friend of a friend, so I trusted him. After I got my beloved books in my hands, I knew I did the right thing.

3. What kind of research did you do for the novel?

The setting used to take place in New York, but someone a long time ago told me it sounds as though it’s in Augusta, Ga (where I currently reside). That got me a bit worried because the setting relies a lot on the aftermath of a bad snowstorm. I mean, it is the south, where we hardly see one flake. I went online to see whether it was possible (although I knew it’d be okay since it’s fiction and anything was possible). I was glad to find that in 1973 we were hit with sixteen inches of snow. Although it was a long time, it satisfied me. The other researching I did was try and get the investigation as close to real as possible. I spoke to several police officers, primarily lieutenants, since  my main character is a lieutenant. They were kind enough to answer any and all questions.

4. When I read a book I sometimes like to have a visual of characters. What actors would play your main characters in a movie?

Lt. Jim DeLong: Michael Fassbender. He’s a little older than DeLong, but I think he’d be good for it.
Russ Calhoun: Possibly Dean Winters
5. What are you working on now?
I’m currently editing the sequel to “Manny Grimes,” and plan to release it in a few months. I also have an FBI thriller ready to be edited and another book I’ve almost completed. I’m only doing suspense now, however, I’m starting to dabble with a bit of romance–I already have an idea for a saga.

6. I know you edit the work of other authors, how can people contact you for your services?

My website: https://angelakaysbooks.com/angela-kays-editing/
7. What do you think is the one thing that drives your main character to do what he does?
Lieutenant Jim DeLong is passion-driven. I think when he gets something in his mind, he can’t seem to let it go. It’s also somewhat of a release while he’s dealing with personal issues outside of work.
8. If you could’ve written any other book than your own, what would it be and why?
Probably “Pride and Prejudice.” I love that book so much. It’s in a complete different era and I get swept away in the character’s lives.

Is there a way people can get an autographed copy of your book?

Sure! They can email me for more information at angelakaysbooks@gmail.com. I sell signed copies of my book for $14 even. That includes shipping and handling. You can check out my book by clicking on these links: Amazon and Barnes and Noble.

To learn how to receive a FREE PDF copy of The Murder of Manny Grimes, click HERE!

2 thoughts on “Spotlight on Indie Author @AngelaKaysBooks. The Murder of Manny Grimes.”